WWE SmackDown premiere episode on Fox will take place on Oct 4, 2019. The action will take place at the Staples Center, Los Angeles. Also note, from now onwards SmackDown will be live on every Friday night instead of Tuesday. The blue brand of WWE will debut on Fox with a massive show. 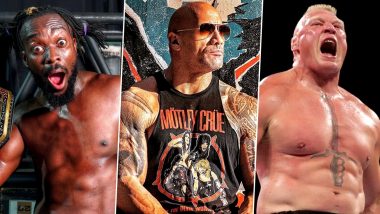 WWE SmackDown premiere episode on Fox will take place on Oct 4, 2019. The action will take place at the Staples Center, Los Angeles. Also note, from now onwards SmackDown will be live on every Friday night instead of Tuesday. The blue brand of WWE will debut on Fox with a massive show. We will see Brock Lesnar face Kofi Kingston for WWE Championship in the upcoming episode. WWE fans will also be excited to know that the people's champion The Rock will appear on SmackDown premiere episode on Fox. Meanwhile, if you are looking for live streaming and preview of SmackDown Premiere on Fox, then you have arrived at the right platform as we will provide you with the telecast details in depth. WWE SmackDown Sept 24, 2019 Results and Highlights: Roman Reigns & Daniel Bryan to Face Erick Rowans & Luke Harper at Hell in a Cell (View Pics & Videos)

Brock Lesnar was previously the WWE Universal Champion, he lost his belt to Seth Rollins at WWE SummerSlam 2019. The Beast Incarnate assaulted Kofi Kingston a few weeks back on SmackDown. Lesnar also attacked Rey Mysterio and his son this past week on Raw to send out a strong message to Kofi Kingston. Apart from this main attraction of the show, we will witness another big draw where the fate of Kevin Owens and Shane McMahon will be decided in a ladder match. Last week on SmackDown Owens challenged Shane for a match, where he set the stipulation that the loser of the match will be fired from WWE. The other matches on the card are Roman Reigns vs Erick Rowan and Becky Lynch & Charlotte Flair vs Sasha Banks & Bayley. WWE Raw September 30, 2019 Results and Highlights: Team Hogan vs Team Flair Match Announced on ‘Miz TV’, Seth Rollins Gets Attacked By The Fiend (Watch Videos)

The Rock's Tweet Ahead of SmackDown Premiere on Fox

FINALLY...I come back home to my @WWE universe.

This FRIDAY NIGHT, I’ll return for our debut of SMACKDOWN!

There’s no greater title than #thepeopleschamp.

When and Where to Watch WWE SmackDown in India: WWE SmackDown can be viewed in India live on Sony Ten 1 in English and Sony Ten 3 in Hindi. The show will telecast live from 5:30 AM IST on Oct 5, 2019.

SmackDown is all set to give the red brand of WWE a tough time. The blue brand was unable to draw viewership in great numbers for quite some time. This move to shift on Fox with a kickoff premiere episode can indeed change fortune for SmackDown.

(The above story first appeared on LatestLY on Oct 04, 2019 11:45 PM IST. For more news and updates on politics, world, sports, entertainment and lifestyle, log on to our website latestly.com).