This year SummerSlam 2020 will take place on August 23 at the Amway Center in Orlando, Florida. Superstars from Raw and SmackDown brand will participate in this WWE event. Due to the coronavirus pandemic situation, live crowds will not be present however through WWE ThunderDome concept, they will participate virtually in the arena. 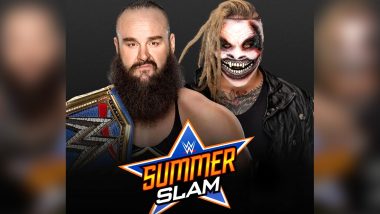 We have finally arrived at the second-most mega pay per view event of WWE, which is SummerSlam. This year SummerSlam 2020 will take place on August 23 at the Amway Center in Orlando, Florida. This will be the 33rd event under SummerSlam chronology. Superstars from Raw and SmackDown brand will participate in this WWE event. Due to the coronavirus pandemic situation, live crowds will not be present however through WWE ThunderDome concept, they will participate virtually in the arena. Meanwhile, you have arrived at the right platform, if you are looking for WWE SummerSlam August 23, 2020, live streaming, preview and match card. Braun Strowman vs Bray Wyatt, Drew McIntyre vs Randy Orton and many more exciting matches are lined up in the upcoming event of WWE. WWE Raw Aug 17, 2020 Results and Highlights: Randy Orton Makes Shawn Michaels His Next Victim, The Viper Hits Drew McIntyre With RKO After Assaulting HBK.

On this past week episode of SmackDown, we saw AJ Styles lose Intercontinental Championship belt to Jeff Hardy. WWE ThunderDome concept at Amway Center kicked off with this week's SmackDown episode. Apart from this, we saw Braun Strowman and 'The Fiend' Bray Wyatt confront each other where WWE chairman Vince McMahon also appeared prior to their meeting. However, it all ended with chaos as the Retribution yet again made an attack on SmackDown. WWE NXT Aug 19, 2020 Results and Highlights: Pat McAfee Confronts Adam Cole; Johnny Gargano & The Velveteen Dream Earn Final Two Spots For North American Title at Takeover XXX.

On this past week episode of Raw, we saw Randy Orton make Shawn Michaels his next victim, after which he even hit Drew McIntyre with RKO. It will indeed be an interesting contest to watch out for between these two superstars, where the Scottish Psychopath will defend his WWE title. Now let's come to women's division, former best buddies Sonya Deville and Mandy Rose will battle each other at SummerSlam 2020 to settle their difference. Also, Asuka will have the chance to win two titles from Raw and SmackDown as she will face Bayley and Sasha Banks in individual matches for Women's title match of different brands.

We will also see Rey Mysterio stand by the corner of his son during a street fight against Seth Rollins at SummerSlam 2020. Fans also have one more big event, WWE Payback 2020 coming up in just one week time. Stay tuned with LatestLY for more updates and news from WWE.

(The above story first appeared on LatestLY on Aug 23, 2020 08:04 PM IST. For more news and updates on politics, world, sports, entertainment and lifestyle, log on to our website latestly.com).