WWE TLC 2019 took place on Dec 15 at Minneapolis, Minnesota. Bray Wyatt successfully defended his Universal Championship Belt as he defeated The Miz. However, after the match, 'The Fiend' Bray Wyatt got the taste of his own medicine as someone started to play mind games against him. 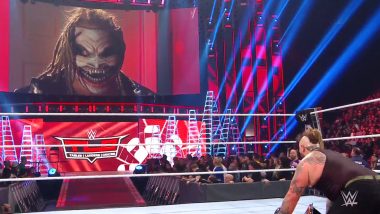 WWE TLC 2019 took place on Dec 15 at Minneapolis, Minnesota. Bray Wyatt successfully defended his Universal Championship Belt as he defeated The Miz. However, after the match, 'The Fiend' Bray Wyatt got the taste of his own medicine as someone started to play mind games against him. We saw Bray Wyatt's alter ego character 'The Fiend' appear on the Titantron after the match and soon after that Daniel Bryan entered the ring from behind to attack him. Meanwhile, you have arrived at the right platform, if you are looking for results and highlights of WWE TLC 2019. WWE Raw Dec 9, 2019 Results and Highlights: Seth Rollins & AOP Attack Kevin Owens; Randy Orton Hampers AJ Styles' Chances To Win United States Championship Belt (Watch Videos)

The Universal Champion Bray Wyatt left no stone unturned in keeping the crowd attention drawn towards him during the match, as we saw him doing weird things during the match against Miz. Bray Wyatt for one instance was also seen running towards security rallying and bang his shoulders. The past main event of WWE TLC, however, turned out to be the night for heel wrestlers. WWE NXT Dec 11, 2019 Results and Highlights: Finn Balor Defeats Tommaso Ciampa & Keith Lee in Triple Threat Match, The Prince to Face Adam Cole in NXT Championship (Watch Videos)

King Corbin defeated Roman Reigns which was indeed a big victory for him. However, Corbin got good support from Heel Ziggler and The Revival. Bobby Lashley won against Rusev which made Lana super happy. Asuka and Kaira Sane, the team of Kabuki Warriors defeated Becky Lynch and Charlotte Flair in a ladder match. This women's tag team battle was a brutal match where WWE divas put their body on the line.

Bray Wyatt Proves Why He is Different From Others

Baron Corbin After The Victory

Karl Anderson Goes Through The Table

This doesn’t always happen when you’re trying to enjoy a nice @kfc meal... but at #WWETLC, it’s inevitable! pic.twitter.com/bAGYTUmpFe

Becky Lynch Sends Asuka Through a Table with a Flying leap

The team of Kingston and Big E, The New Day defeated The Revivals in a ladder match to retain their Tag Team Championship belt. Apart from that, we also saw a unique double count-out between The Viking Raiders and The O.C., due to which the former still retain their Raw Tag Team Championship belt. It will be interesting to see what happen in the upcoming episode of WWE SmackDown where we will hear from both Daniel Bryan and Bray Wyatt after what happened on WWE TLC 2019.

(The above story first appeared on LatestLY on Dec 16, 2019 11:40 AM IST. For more news and updates on politics, world, sports, entertainment and lifestyle, log on to our website latestly.com).