Google, Microsoft To Use Renewable Energy in Data Centres To Lower IT Operations’ Carbon Footprint

According to 'The Register', Google has signed a power purchase agreement (PPA) with Engie, a French utility company, for 100 MW of energy generated by the Moray West offshore wind farm in Scotland to power its UK operations. 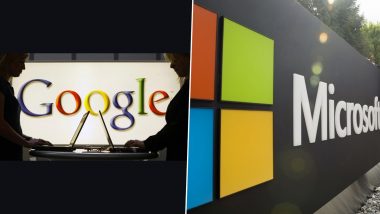 San Francisco, November 27:  Google and Microsoft have both announced new agreements to lower their IT operations' carbon footprint by using renewable energy sources in their data centres.

According to 'The Register', Google has signed a power purchase agreement (PPA) with Engie, a French utility company, for 100 MW of energy generated by the Moray West offshore wind farm in Scotland to power its UK operations. Google Play Removes Battery-Draining Android Apps With Over 20 Million Downloads for Using Excessive Mobile Data.

Meanwhile, Microsoft announced PPAs supplying more than 900 MW of renewable energy in Ireland for its data centres. While Microsoft did not disclose its renewable energy suppliers, other sources identified Statkraft and Ireland's Energia Group as two that are involved, with a mix of wind and solar projects, according to the report.

Google claimed that the new agreements will bring the company closer to its goal of running its UK offices and cloud regions entirely on carbon-free energy sources by 2030. The company stated that with the most recent PPA signed with Engie, it expects to be at or near carbon-free by 2025. Microsoft India Announces Pre-Orders of New Surface Laptop 5 and Surface Pro 9; Check Prices, Other Specifications.

Matt Brittin, President of Google EMEA, said that people in the UK and Europe are increasingly concerned about climate change. The move follows earlier agreements by both companies to buy renewable energy in the US, said the report.

SoftBank subsidiary SB Energy signed a deal with Google for 900MW of solar power to power a Texas data centre, while Microsoft recently entered into a 20-year agreement with AES Corporation to supply its data centres in California with renewable energy from 110 MW solar and 55 MW four-hour storage projects.

In addition to expanding its data centres to meet customer demands, Microsoft has also increased its commitment to reducing carbon consumption and contributing to climate change solutions, the report added.

(The above story first appeared on LatestLY on Nov 27, 2022 07:45 PM IST. For more news and updates on politics, world, sports, entertainment and lifestyle, log on to our website latestly.com).