Numerous Websites Down: Sites Including Reddit, Paypal And Amazon Affected Due to Outage

Large parts of the internet have suffered an outage on Tuesday, due to which numerous sites are affected. The websites that were affected include Twitch, Reddit, Amazon and Paypal. 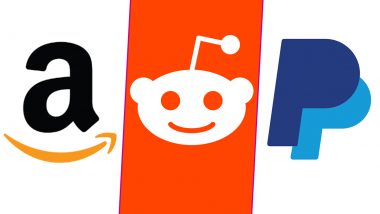 Mumbai, June 8: Large parts of the internet have suffered an outage on Tuesday, due to which numerous sites are affected. The websites that were affected include Twitch, Reddit, Amazon and Paypal. Meanwhile, most of them are government-run websites. According to reports, the web outage is believed to be caused Fastly Edge systems, a popular CDN provider. Twitter Down: Micro-Blogging Site Faces Outage Again, Users Unable to Login, Post New Tweets.

The other websites which are affected are - Etsy, Vimeo, Shopify, Stackoverflow, New York Times, CNN and Pinterest. Users are getting “Error 503” message. According to Sky News, the global online content delivery network (CDN) is currently investigating the matter. Some of the websites  are even showing "Fastly Error". Massive Internet Outage Brings Down Big Global Websites; NYT, CNN, BBC Among Those Hit.

Here Are Some OF The Posts By Twitter Users Compaining About The Outage:

Worryingly easy for online services to be disrupted. Reportedly, because of problems at Fastly, a data centre provider, the following sites are down at present. pic.twitter.com/YT3q1hkRAt

Huge parts of the web are currently offline

If this affects Zoom, I am taking the day off

Internet users took to Twitter to complain about the outage. However, it is still not clear that how time will be taken to restore services of the affected sites. Notably, a CDN, is a network of proxy servers and their data centres are distributed across a wide area. These companies run global networks of servers to improve performance and availability of web services.

(The above story first appeared on LatestLY on Jun 08, 2021 04:44 PM IST. For more news and updates on politics, world, sports, entertainment and lifestyle, log on to our website latestly.com).