The breakthrough was made when the team found that humans, chimps and gorillas all shared the exact same receptor sequence, which had evolved to resist snake venom, a sequence which was not found in other tree-faring primate species such as lemurs and other South American monkeys. 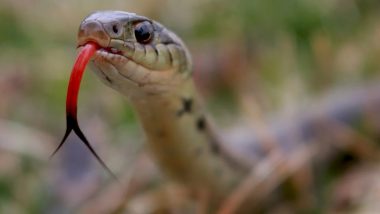 Sydney Dec 8: Australian biologists have shown how our prehistoric ancestors have evolved to survive snake venom.

The study, published in the BMC Biology journal and released by the University of Queensland (UQ) on Tuesday, added a new layer of understanding to our evolutionary past, showing how early upright primates evolved increased eyesight and venom resistance as they began to come into contact with snakes, Xinhua news agency reported. Healthier and Nutritious Diets are Linked with Lower Greenhouse Gas Emission, Suggests Research

"As primates from Africa gained the ability to walk upright and were dispersed throughout Asia, they developed weapons to defend themselves against venomous snakes. This likely sparked an evolutionary arms race and evolved this venom resistance," said Harris.

The breakthrough was made when the team found that humans, chimps and gorillas all shared the exact same receptor sequence, which had evolved to resist snake venom, a sequence which was not found in other tree-faring primate species such as lemurs and other South American monkeys.

"Humans, chimps, and gorillas had the greatest resistance we found, and the reason for that was the whole group had the exact same receptor sequence," Harris said.

"It is important to note that this resistance is not absolute -- we are not immune to cobra venom, just much less likely to die than other primates," noted lead author, Associate Professor Bryan Fry, from UQ's School of Biological Sciences.

Harris said the study also looked at how the development of human eyesight could be an evolutionary adaptation as primates came down from the treetops and needed to see greater distances.

"Many primate groups appear to also have developed excellent eyesight, which is thought to have aided them in detecting and defending themselves against venomous snakes."

Harris said that the discovery would open a new window into the understanding of primate evolution and could also explain migratory patterns in "our primate ancestors."

"(It will allow us) to explore further this relationship between primates and early hominins and venomous snakes... (which will) allow us to understand our own evolutionary history." New Research on Reading the Mind of Worms

"We are increasingly recognising the importance snakes have played in the evolution of primates, including the way our brain is structured, aspects of language and even tool use," said Fry.

"This work reveals yet another piece in the puzzle of this complex arms race."

(The above story first appeared on LatestLY on Dec 08, 2021 11:35 AM IST. For more news and updates on politics, world, sports, entertainment and lifestyle, log on to our website latestly.com).