Solar Eclipse April 2022 FAQs: Why Does an Eclipse Occur? How Many Solar Eclipses Will Occur This Year? Everything You Need To Know About ‘Surya Grahan’

The first Surya Grahan or Solar Eclipse of the year 2022 will occur on April 30, Saturday in parts of South and West-South America, Pacific Ocean, Atlantic and Antarctic Ocean. This solar eclipse will be the first of two partial solar eclipses in 2022, as the second will occur on October 25th, 2022. Here is everything you need to know about the partial eclipse. 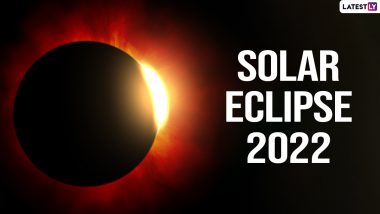 Solar eclipses occur when the Moon crosses between the Earth and the Sun, blocking its light partially or entirely. It is only possible to see solar eclipses in certain areas and you need to wear eye protection to do so safely. The year 2022 is going to be very notable in terms of astronomical events. There will be two lunar eclipses, two solar eclipses, and no Mercury transits in 2022. Parts of North America will be able to see two eclipses.  Astronomical Events in 2022: From Total Lunar Eclipse in May to Partial Solar Eclipse in October, Check Full List of Celestial Event Calendar.

Parts of Antarctica, the southern tip of South America, and the Pacific and Atlantic Oceans will see a partial solar eclipse on the 30th of April. It will not be visible from India and parts of Southeast Asia. But there are many queries in the minds of fans of astronomy about the Solar Eclipses 2022, here are some frequently asked questions and queries about Solar Eclipse April 2022.

Why does a Solar Eclipse happen?

Due to a chance alignment of the moon, Earth, and sun, solar eclipses or Surya Grahan are possible. Because the moon's distance from Earth varies, an eclipse occurs when it passes in front of the sun at a distance from Earth that is greater than average and partially or completely blocks the sun’s light. A partial eclipse occurs when only some of the light is blocked and the sun is not completely covered.

When is the Solar Eclipse 2022 taking place in April?

The first solar eclipse or Surya Grahan of 2022 is taking place on April 30, Saturday. This is a partial eclipse and according to reports will block about 54% of the sun.

Where will the Solar Eclipse of April 2022 or Surya Grahan take place?

The partial solar eclipse will be taking place over parts of Antarctica, the southern tip of South America, and the Pacific and Atlantic Oceans. It will not be visible from India because it is a partial eclipse.

How can to watch the Solar Eclipse in April 2022 safely?

People often watch eclipses through their own eyes directly but is suggested that to keep the eyes safe and protected people should use binoculars, protective goggles and even box projectors.

The Surya Grahan in April is the first of the two solar eclipses that will take place in 2022. And the Solar Eclipse or Surya Grahan will begin at 12:15 p.m. and end at 4:07 p.m, according to Indian Standard Time (IST). It will last approximately three hours and 52 minutes.

(The above story first appeared on LatestLY on Apr 22, 2022 11:21 AM IST. For more news and updates on politics, world, sports, entertainment and lifestyle, log on to our website latestly.com).