Total Solar Eclipse in December 2020 Won't Be Visible in India: Know When Will the Next Surya Grahan be Visible in 2021

The year of 2020 saw just one solar eclipse, an annular one on June 21. But now people in India will have to wait until next year June to see a partial solar eclipse. Read on to know more details about the upcoming solar eclipse. 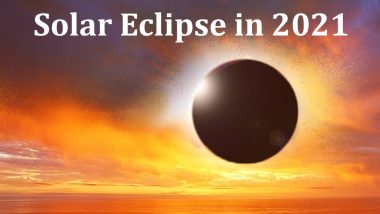 A Solar Eclipse occurs when the Moon passes from between the Earth and the Sun. During this, the Sun gets partially or fully covered by the Moon's shadow as it appears to those on Earth. During an eclipse, the Sun, Moon and Earth come in almost the same line. During a total solar eclipse, the Moon's shadow covers the Sun almost completely.

Since this solar eclipse is not visible, a lot of people would want to know when is the next one that will be seen from India. The next solar eclipse will take place on June 10, 2021. It will be an annular solar eclipse visible from parts of Russia, Greenland, and northern Canada. Those in Northern Asia, Europe, and the United States will see a partial eclipse.

Other than the solar eclipse this month, we also have a meteor shower, kissing planets and more. So if you are a stargazing enthusiast, this is good time to pin your eyes to the sky.

(The above story first appeared on LatestLY on Dec 11, 2020 03:06 PM IST. For more news and updates on politics, world, sports, entertainment and lifestyle, log on to our website latestly.com).