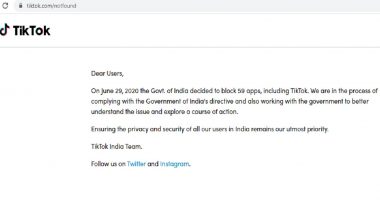 New Delhi, June 30: A day after the government banned 59 Chinese apps, including TikTok, the short-video making app has stopped working and gone completely offline in India. TikTok users in India are unable to upload or watch videos on the Chinese application. If one open TikTok's website on desktop or the app on a smartphone, it shows a network error. Besides, TikTok shows a notice, saying the app is in the process of complying with the government order to ban 59 Chinese apps.

"Dear users, we are in the process of complying with the Government of India's directive to block 59 apps. Ensuring the privacy and security of all our users in India remains our utmost priority," reads the notice on TikTok's website and application. Earlier today, TikTok, which has millions of users in India, said it will submit a clarification to the Indian government over allegations of data theft and privacy breach. China 'Strongly Concerned' Over India's Decision to Ban 59 Chinese Apps Including TikTok.

The government on Monday banned apps like TikTok, SHAREit, Helo, WeChat, UC Browser and Xiaomi's Mi Community over national security concerns as India-China bilateral relations remain strained after the death of 20 Indian soldiers in the Galwan Valley clash with Chinese PLA troops in eastern Ladakh. Subsequently, TikTok and 58 other Chinese apps were delisted from Google Play and App Store. Chingari, Another Indian Alternative to TikTok? Know Everything About The Social Media App That Pays Money to Video Creators.

"The government of India has issued an interim order for the blocking of 59 apps, including TikTok and we are in the process of complying with it," said Nikhil Gandhi, Head of TikTok India, adding that the company has been "invited to meet with concerned government stakeholders" for an opportunity to respond and submit clarifications.

(The above story first appeared on LatestLY on Jun 30, 2020 06:58 PM IST. For more news and updates on politics, world, sports, entertainment and lifestyle, log on to our website latestly.com).