Diana Statue Unveiling: When Is the Unveiling of Princess Diana's Statue? Will the Event Be Televised Live? Know Date, Time and Streaming Details Here

Princes William and Harry will unveil a statue of their mother, Princess Diana, on what would have been her 60th birthday. Princes Diana died in 1997. 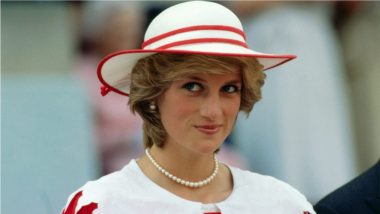 London, July 1: Princes William and Harry will unveil a statue of their mother, Princess Diana, on what would have been her 60th birthday. Princes Diana died in 1997. The Diana statue unveiling assumes significance given ongoing feud between the Royal Family and Price Harry and his wife Meghan. The Diana statue unveiling ceremony may display any sign of truce or widening rift. Scroll down to get date, time, live streaming and other details about the special event being held in memory of Princess Diana. 'We Are Very Much Not a Racist Family,' Says Prince William During a Visit to a School in London After Meghan and Harry's Oprah Interview.

When Is the Diana Statue Unveiling?

Princes William and Harry will unveil a statue of Princess Diana on July 1. The exact time for the unveiling has not been specified.

Where Is Diana's Statue Going to Be?

The statue of Diana is built in the Sunken Garden at London's Kensington Palace.

Will the Diana Statue Unveiling be Televised?

The Diana statue unveiling will not be televised live. Surely, photos will come out after the event. Public will be able to see the statue post the unveiling as the Kensington Palace and its gardens are open to visitors.

How to Watch Diana Statue Unveiling?

As mentioned above, the Diana statue unveiling won't be streamed live. Hence, people will have to wait for photos to come out.

Are William and Harry Speaking?

Princess Diana died in a car crash in Paris in 1997. She was one of the most popular person in the world. William was 15 when Diana died and Harry was just 12. She married Prince Charles on 29 July 1981. Her statue is designed by Pip Morrison and sculpted by Ian Rank-Broadley.

(The above story first appeared on LatestLY on Jul 01, 2021 12:17 PM IST. For more news and updates on politics, world, sports, entertainment and lifestyle, log on to our website latestly.com).