Prince Philip Funeral: Duke of Edinburgh and Husband of Queen Elizabeth II to Be Laid to Rest at Windsor Castle

Prince Philip, the Duke of Edinburgh and husband of Queen Elizabeth II, will be laid to rest at Windsor Palace on Saturday in what will be a small family affair due to Covid-19 restrictions. 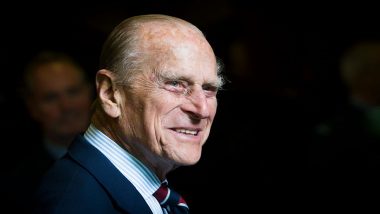 London, April 17: Prince Philip, the Duke of Edinburgh and husband of Queen Elizabeth II, will be laid to rest at Windsor Palace on Saturday in what will be a small family affair due to Covid-19 restrictions.

The funeral is set to begin at 2.40 p.m. (local time) with the coffin leaving the Castle, followed by a funeral march and a nationwide minute of silence, according to Buckingham Palace.

After a service at St. George's Chapel held by the Dean of Windsor, the Archbishop of Canterbury will give the blessing after the coffin has been lowered into the Royal Vault, reports dpa news agency.

In line with health regulations currently in place in England, only 30 guests will attend the ceremony, most of them members of the Royal Family.

Queen Elizabeth II, the couple's four children, eight grandchildren, the Queen's niece and nephew and three of her cousins will all be attending the service on Saturday.

In addition, the Prince's German relatives Bernhard, Hereditary Prince of Baden, Prince Donatus, Landgrave of Hesse and Prince Philipp of Hohenlohe-Langenburg will be in attendance.

The Countess Mountbatten of Burma, a close friend of Prince Philip, will also be attending the service.

Some of the spouses of the Queen's children and grandchildren have been included on the guestlist.

But Meghan, the Duchess of Sussex and Prince Harry's wife, is not going to the funeral due to her pregnancy. The funeral will be broadcast live on television.

The Duke of Edinburgh passed away at the Windsor Castle on April 9 at the age of 99.

Prince Philip was born on the Greek island of Corfu on June 10, 1921. He married Princess Elizabeth in 1947, five years before she became Queen, and was the longest-serving royal consort in British history.

In May 2017, the Duke retired from his own program of royal duties after carrying out more than 20,000 solo public engagements. He left hospital last month after a month-long treatment. He underwent a procedure for a pre-existing heart condition, according to Buckingham Palace.

(The above story first appeared on LatestLY on Apr 17, 2021 02:49 PM IST. For more news and updates on politics, world, sports, entertainment and lifestyle, log on to our website latestly.com).