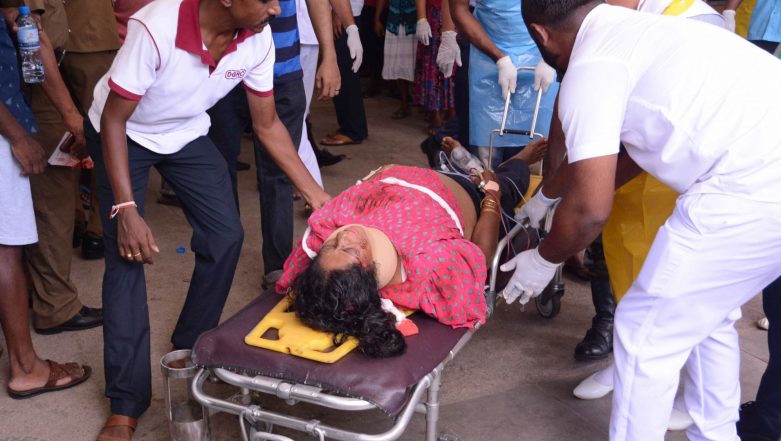 An injured woman is carried on a stretcher in a hospital in Negombo, north of Colombo, Sri Lanka, April 21, 2019. Sri Lankan Police said on Sunday that 13 people had been arrested over a series of blasts which killed 228 people across the island nation. (Photo Credits: IANS)

Colombo, April 22: The government on Monday blamed a  for the horrific serial bombings which killed 290 people in the country on Easter Sunday and said the attacks were "a colossal intelligence failure". The National Thowheed Jamath (NTJ) carried out the eight explosions across three cities in Sri Lanka, also injuring over 500 people, the government told the media. Serial Blasts In Sri Lanka on Easter Sunday, Churches And Hotels Hit; Nearly 156 People Dead, Over 400 Injured.

Health Minister Rajitha Senaratne said: "National Thowheed Jamath was involved. It is a local organisation. We don't know whether they are linked to outsiders. All those arrested are locals."

Senaratne, who was addressing the media along with other Ministers, called the well-planned attacks a "colossal intelligence failure" and stated that despite receiving prior information, the attacks could not be prevented, media reports said.

The Minister said that on April 4, international intelligence agencies -- which he did not identify -- had warned of these attacks and even mentioned that the targets would be churches and tourist destinations.

The Inspector General of Police was informed of this on April 9, and even names of suspected terrorists were given to him, Senaratne said. He said the country's Security Council wanted to meet on Sunday but it did not happen as President Maithripala Sirirsena was overseas.

"As a government, we apologize to families and other institutions. The problem is that even when we met the Prime Minister at the Cabinet meeting, the Prime Minister was also in the dark," he said. Catch LIVE Updates on Sri Lanka Serial Blasts on Easter Sunday.

"He had seen this circular only when we did. He was left out of Security Council meetings." Two Sri Lankan Ministers, Mano Ganesan and Harin Fernando, also stated on Twitter that the government had prior information about an impending attack.

Calling for the resignation of the Inspector General of Police, Senaratne said: "This morning (Monday) the President, the Prime Minister and State Defence Minister met for the first time. We need a unified political leadership today to overcome this situation and we will take every action to eradicate terrorism from our country." Sri Lanka has been plagued in recent times by an unseemly conflict between the President and the Prime Minister.