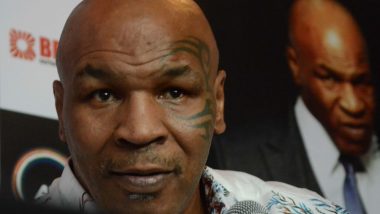 London, Aug 1: British boxing heavyweight superstar Anthony Joshua warned legendary Mike Tyson against fighting the current top pugilists of the world and urged him to stick with exhibition challenges on his comeback.

Tyson, 54, has been sharing videos of his training on social media as he gears up for the much-anticipated exhibition bout against another former great Roy Jones Jr. in Los Angeles on September 12. Jamie Foxx Confirms to Play Mike Tyson in Legendary Boxer’s Biopic.

"You see a clip on social media and you think: 'He's back in action, he's fighting fit'. But it's like an old-time footballer doing a crossbar challenge," Joshua said at a Sky VIP event.

"Tyson hitting pads with ferocious behaviour is second nature to him. But to someone watching from home? It's like he's going to rule the heavyweight division.

"It's a passion they both love, it's what they know. Tyson has been fighting since he was 13.

"It's all they know. They haven't got to compete with the young lions of the division. We're bigger, stronger, science has improved so we have more technology," he added.

Joshua, however, had earlier ruled out any chance of him getting inside the ring with Tyson. Joshua, who currently holds four of the five heavyweight titles, said he idolised Tyson in his younger days.

"With all due respect I wouldn't," Joshua told The Sun last month. "Even if I fought Iron Mike and beat him, I think I'd be the only one cheering. People would boo. He is a legend. He is the greatest boxer of the modern era.

"There are only two recognised champions the world knows of, Ali and Mike Tyson -- the most recognised faces in the world when it comes to boxing," he added.

(The above story first appeared on LatestLY on Aug 01, 2020 07:53 PM IST. For more news and updates on politics, world, sports, entertainment and lifestyle, log on to our website latestly.com).