All smiles, the three leaders quickly interlocked their hands amid applause and the unmistakable political subtext of the event that saw the launch of completed infra projects and laying the foundation for new initiatives was not lost on anyone. 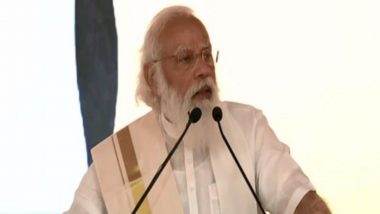 Chennai, February 14: Setting the stage for a positive campaign for the Tamil Nadu Assembly polls, likely in April, Prime Minister Narendra Modi on Sunday latched on to Tamil culture and justice for people and backed the aspirations of Sri Lankan Tamils.

Signalling a united fight against the background of belligerence of expelled AIADMK leaders T T V Dhinakaran and his aunt V K Sasikala, Modi gestured to Chief Minister K Palaniswami and Deputy Chief Minister O Panneerselvam on the dias to join and lift hands with him.

All smiles, the three leaders quickly interlocked their hands amid applause and the unmistakable political subtext of the event that saw the launch of completed infra projects and laying the foundation for new initiatives was not lost on anyone. PM Narendra Modi Shares Unique View of India vs England 2nd Test 2021 From Chennai Skies.

Congress leader Rahul Gandhi had during his recent campaign in Tamil Nadu accused the BJP and Modi of showing 'no respect' to Tamil culture. While AIADMK and BJP have already announced that they would fight the assembly elections together, Sasikala's camp, steered by Dhinakaran, have been staking claim to the party and harping on its retrieval.

Quoting verses of Tamil poet of yore, 'Avvaiyar', Modi said it was also an inspiration to the 'Aatmanirbhar Bharat' (Self-reliant India) goals. The popular lines underscore that water is the basic element that could lead to the nation's prosperity.

Stressing water conservation, the PM urged the people to do work towards that goal and underlined that it was not only a national issue, but also had global implications.

"Always remember the mantra of per drop more crop, this will help future generations." Laying the foundation stone for modernisation of 636 kilometres long Grand Anicut Canal System in Tamil Nadu's Cauvery delta region, he said the Anicut "is a living testimony to our glorious past."

The plan would have a big impact and improve irrigation facilities for 2.27 lakh acres in the delta region and Thanjavur and Pudukottai districts shall gain specially, he said.

"I want to appreciate the farmers of Tamil Nadu for record food grain production and good use of water resources." Hailing Tamil as the oldest language in the world, he quoted nationalist Tamil poet Mahakavi Subramaniya Bharathi's famous lines that stressed on manufacturing domestically.

Modi said the nation was inspired by the vision of the freedom fighter and has undertaken a massive effort to become self-reliant in the defence sector.

One of the two defence corridors is in Tamil Nadu and it has already received investment commitments exceeding Rs 8,100 crore, he noted.

"A tank made in Tamil Nadu will be used in our northern borders to keep the nation safe. This showcases India's united spirit Bharat's Ekta Darshan." Modi said the Centre has accepted the Devendrakula Vellalar community's demand to be listed only by their collective, traditional name of 'Devendrakula Vellalar (DVR)' and not by the names of seven sub-sects.

Identifying himself with the community's aspirations, he said their name 'Devender' rhymed with his name 'Narendra,' adding, "I understand their emotions." The ruling AIADMK has backed and recommended the move.

"Colonial rulers took away their pride and dignity. For decades nothing happened." It was beyond change of name and it was about, "justice, dignity and opportunity," for them. Praising the community, he said they celebrated harmony, friendship and brotherhood. "Theirs was a civilisational movement. It shows their self-confidence and self pride, Aatma Gaurav."

The Puthiya Thamizhagam had for a long time been demanding renaming the seven sects under a single heritage name of DVR and also had wanted delisting the caste from the list of Scheduled Castes. PM Narendra Modi Hands Over Arjun MK-1A Tank to Indian Army.

Asserting that his government had always taken care of the welfare of Sri Lankan Tamils, Modi said, "it is my honour to have been the only Indian PM to visit Jaffna." Listing several development and welfare initiatives facilitated by the Centre for Tamils in Lanka, he said the issue of rights of Tamils have also been taken up by India with Sri Lanka.

"We are always committed to ensuring that they live with equality, justice peace and dignity." The projects he listed include 50,000 houses for displaced Tamils in North eastern Lanka, 4,000 tenements in plantation areas, a hospital, free ambulance services, and rebuilding the rail network there.

"I feel happy to share that India has built the Jaffna Cultural Centre which we hope to open soon." On the travails of Tamil Nadu fishermen, vis-a-vis Sri Lanka, the Prime Minister assured that his government always protected their rightful interests.

The Centre has ensured early release, whenever fishermen were apprehended in Sri Lanka, he said. More than 1,600 fishermen have been released during the BJP-led government's tenure and currently, there is no Indian fisherman in Sri Lankan custody.

Also, 313 boats have also been released and "we are working for the return of the rest of the boats," he said. Earlier, he began and ended his address with 'Vankakkam' and praised Chennai as a city full of energy and enthusiasm and a centre of knowledge and creativity.