It is our government's priority to maintain the law and order situation in the state" Prasad said. 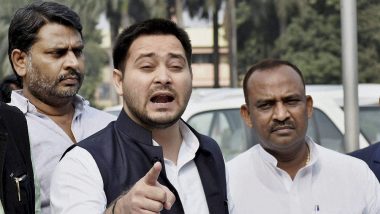 "It is not a hidden fact, everyone knows what was the law and order situation under the previous government in Bihar, and BJP has successfully transformed the state. It is our government's priority to maintain the law and order situation in the state" Prasad said. Also Read | Amit Shah Says 'Municipal Corporation Under TRS, Congress an Impediment to Making Hyderabad IT Hub'.

"All the MLAs of BJP are standing with the party and Tejashwi Yadav should first fix his own house and avoid giving such statements," he added. Prasad's reaction came after Tejashwi Yadav slammed Bihar Chief Minister Nitish Kumar by terming the law and order situation in the state as "maha jungle raj". Also Read | Oxford Vaccine: Chennai Man Who Volunteered For Trials Seeks Rs 5 Crore Compensation, Says Suffered ‘Neurological and Psychological Issues’.

"In Bihar, 'maha jungle raj' is going wild with the outpouring of criminals, gunfire, and havoc on businessmen. There is a chaotic and scary environment everywhere. Law and order have vanished. The Chief Minister sitting in his double-engine train is lethargic and helpless. Why is 'maharaja' of the maha jungle raj silent?" Yadav tweeted in Hindi.

He said this after an aide of Janata Dal-United legislator Amarendra Pandey died on Saturday in Gopalganj after unidentified miscreants opened fire at him and two others.

Those who sustained injuries in the incident were admitted to a hospital. A case has been registered and two persons have been arrested in the matter and are being questioned about their involvement in the crime.