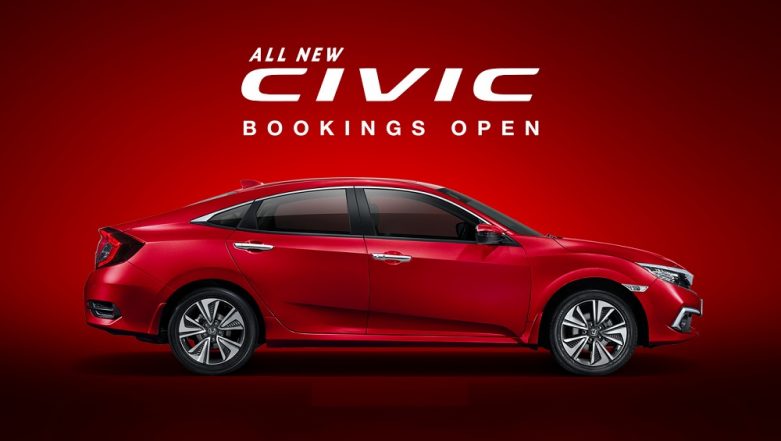 Japanese car manufacturer, Honda is all set to reintroduce the new generation Honda Civic on the Indian soil. Scheduled to be launched on March 7, the company has officially started taking pre-bookings for the tenth generation Honda Civic. Interested customers can book the new Civic with booking amount of Rs 31,000. The sedan made its public debut at 2018 Auto Expo. The all-new Honda Civic will be based on Honda's compact global platform. 2019 Honda Civic Sedan Spotted Testing For the First Time in India.

On the exterior front, the new sedan sports a chrome finished grille which is flanked LED headlights and L-shaped LED DRLs. The front profile is also underlined by dual-tone front bumper with chrome inserts and all-new fog lamps. At the side, the sedan flaunts coupe-like roof line with chrome window surrounds and dual-tone alloys. The rear profile of the sedan is highlighted by C-shaped tail lights and dual-tone bumper. On the dimension front, the new Honda Civic will measure 4656 mm in length, 1799 mm in width and 1433 mm in height along with wheelbase of 2700 mm.

Under the hood, the all-new Honda Civic will be offerred in both petrol and diesel engine options. The petrol mill will be a 1.8-litre unit, four-cylinder unit that will produce 139 bhp @ 6500 rpm and 174 Nm of peak torque @ 4300 rpm. The diesel unit will be a 1.6-litre i-DTEC unit that will generate 118 bhp @ 4000 rpm against peak torque of 300 Nm @ 2000 rpm. Transmission duties on the new Civic will be carried out by CVT unit and 6-speed manual gearbox. As far as the fuel efficiency is concerned, Honda claims that new Civic will return 16.5 kmpl and 26.8 kmpl on the petrol and diesel respectively.