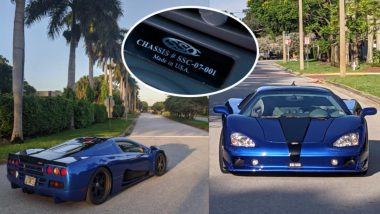 From the beginning, Jerod Shelby and his team knew that breaking into the industry of high performance production cars would require a feat of engineering and automotive ingenuity like no other.  Slowly, under a blanket of silence, a small company in West Richland, Washington formulated the plans for a supercar/ hypercar that they were confident would take the world by storm. It took years of design and development led to what the world would soon know as the Ultimate Aero TT. On September 13, 2007, on a rural paved road in Eastern Washington State, the SSC Ultimate Aero Twin Turbo became the fastest production car in the world, reaching an average top speed of 256.14 mph. The monster was born and this

Company was forever written in history.

This very important American legend of a hypercar going to auction at mecum is actually vin number 001 of the SSC ultimate aero twin turbo. Very important car for collectors and hypercar historians. Covered approximately about 7000 miles this car was pride of place at the hypercar exhibits at the London Motor Museum before being shipped back home to the USA by the current owner.   It has never been painted or modified in any way . All original maintained and serviced by SSC North America.

This american legend hypercar will be sold at Mecum auction on Saturday August 14th in Monterey California. Estimated to bring $750k  or more this is one hypercar that could not be missed by hypercar collectors and supercar aficionados. With only 15 ultimate aero built, owning vin number 001 will probably be the most important car you ever buy.