Hyundai Motor India Ltd Says It Has Received Over 55,000 Bookings for Recently Launched All New Version of Creta 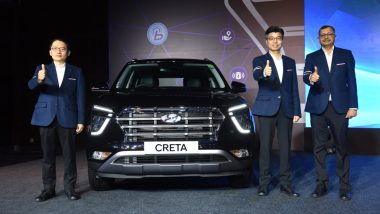 New Delhi, July 29: Hyundai Motor India Ltd (HMIL) on Wednesday said it has received over 55,000 bookings for the recently launched all new version of Creta. “Ever since its launch in 2015, Creta has been a benchmark in the industry, a household name that has represented distinction and success for over 4.85 lakh valued customers," HMIL Director (Sales, Marketing and Service) Tarun Garg said.

With the launch of new Creta in March, the company has once again redefined SUV leadership in the segment and established its supremacy, recording over 55,000 bookings and more than 20,000 customers in just four months, he added. Auto Expo 2020: New Hyundai Creta SUV Unveiled By Shahrukh Khan.

This achievement stands testament to the model's feature rich package and dominant performance which has won hearts across India, even during these trying times, Garg noted.

The model established leadership in the SUV segment by attaining highest sales in the month of May and June 2020, HMIL said in a statement. The contribution of diesel variants in the Creta bookings continues to increase and is now 60 per cent of the total bookings received, indicating a strong demand for the company's globally proven BSVI technology, it added.