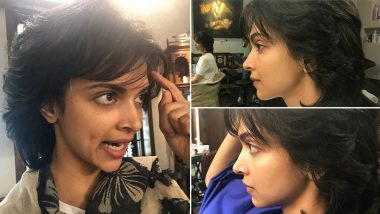 Finally, after a long long wait, the fans got a glimpse of Deepika Padukone's look in '83. The Kabir Khan directorial is a sports drama, produced by the actress herself. She will share the screen space with husband Ranveer Singh who plays former captain of Indian Cricket Team, Kapil Dev. Now, the makers ultimately revealed Deepika's look as Kapil Devs wife, Romi Dev. The picture received a lot of appreciation but as we all know, it all starts with a look test! '83: Deepika Padukone as Romi Dev is All Smiles With Ranveer Singh's Kapil Dev.

Deepika sports short wavy hair in this flick. Of course, this look was kept under the wraps until they officially released it through the new poster. She looks very much similar to Mrs Kapil Dev in that look. However, did you know she had to go through certain look tests before finalising her part? Some pictures of this test have surfaced on the internet, where DP is checking herself out in the makeup room. Take a look.

Describing about her role in the film, the dimpled actress had written, "To be able to play a small part in a film that captures one of the most iconic moments in sporting history has been an absolute honour. I’ve seen very closely the role a wife plays in the success of her husband’s professional and personal aspirations in my mother and ”83′ for me in many ways is an ode to every woman who puts her husband’s dream before her own." Well, now that she has managed to win hearts once again, we can't wait to see the trailer already!

(The above story first appeared on LatestLY on Feb 19, 2020 07:46 PM IST. For more news and updates on politics, world, sports, entertainment and lifestyle, log on to our website latestly.com).