The makers of the film Aadhaar – Sabka Number Aayega, directed by National Film Award-winner Suman Ghosh, have released the trailer. 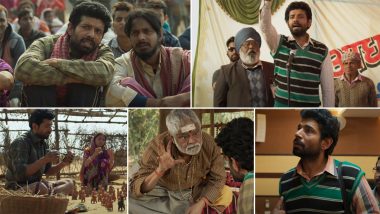 The makers of the film Aadhaar – Sabka Number Aayega, directed by National Film Award-winner Suman Ghosh, have released the trailer. This film had premiere at the 24th Busan International Film Festival in 2019 and had opened to great reviews. The film is all set to get a theatrical release on February 5 in India. But before that you got to take a look at the film’s trailer and it will definitely win your hearts. The trailer of this social dramedy highlights lead actor Vineet Kumar Singh and the villagers innocence, and it is totally relatable. Aadhaar Teaser: Viineet Kumar Singh's Jibe at the Government Will Make You Chuckle (Watch Video).

The trailer shows how the government wants the residents of village of Jamua to apply for Aadhaar Card. When the government officials arrive in the village to explain about the benefits of having an Aadhaar Card, there are many who still seem clueless and find it hard to believe to whatever is being explained to them. The trailer shows how Pharusa (Vineet Kumar Singh) is the first one in his village to get his Aadhaar Card made, but how things change in his life due to his newly registered ID number. Aadhaar First Poster: Viineet Kumar Singh Plays a Villager Trying to Get His Aadhaar Card.

Watch The Trailer Of Aadhaar Below:

(The above story first appeared on LatestLY on Jan 13, 2021 01:15 PM IST. For more news and updates on politics, world, sports, entertainment and lifestyle, log on to our website latestly.com).