Dekh Bhai Dekh actor Lilliput in his latest interview with a portal has said that Shah Rukh Khan should not have done Aanand L Rai’s Zero (2018). He adds that the flick did not touch upon the emotional and social problems a dwarf goes through. Check it out. 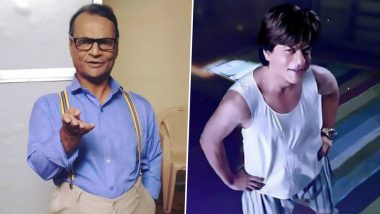 Bollywood superstar Shah Rukh Khan has not announced his next after Aanand L Rai's Zero. In this flick, SRK essayed the role of a dwarf namely Bauua Singh who was smart as well as quick-witted. It also featured Anushka Sharma as a scientist with cerebral palsy and Katrina Kaif as an actress. Even though the film packed a powerful starcast it was a flop at the box office. Now, actor Lilliput, who has played the role of a dwarf in many movies has slammed SRK's role in Zero. He feels that the film did not touch upon the subjects of the emotional, psychological and social problems that a dwarf goes through. Pathan: Is Deepika Padukone’s ‘Shubh Aarambh’ for Shah Rukh Khan Starrer? Actress Reportedly Started Shoot for YRF Film.

In an interview with Bollywood Hungama, Lilliput said that SRK should have not signed the film. “Even when I did not know the story of the film, my reaction was still that Shah Rukh Khan should not have done this film. A normal-looking person can still act as someone who is blind, doesn’t have a leg or an arm, is deaf or mute. He will have to act. What is there to ‘act’ when playing a dwarf? A dwarf speaks, walks, thinks like a normal person. Only his legs and arms are small or he has a distorted figure. But his wit and manner of speaking is no different."

He added, "When you are playing a blind person, you have to act because you are pretending to be blind even when you can see. When you play a person who cannot walk, you have to pretend to be one and convince the audience of it. How will you convince someone that you are a dwarf? When you are so famous." Shah Rukh Khan's Look For Pathan Leaks! Pics Of SRK In Long Hair Will Get You Excited About The Film.

Adding how Zero ignored problems dwarves go through. He said, "When you decided to play a dwarf, you didn’t touch upon the emotional, psychological and social problems that dwarves go through. You didn’t show the trauma and tragedy of a dwarf. Anushka Sharma played a woman with a far more tragic story than him. She couldn’t speak or walk. He was the one jumping around, doing everything, what problem does he have? So even the script was weird. Don’t know how someone so intelligent, successful... they too make mistakes."

Lilliput also expressed how SRK was unable to charm the audience as a dwarf as his expertise lies in romantic roles. Well, we don't know how King Khan fans might react to this. What's your take? Tell us in the comment section below. Stay tuned!

(The above story first appeared on LatestLY on Dec 04, 2020 09:29 AM IST. For more news and updates on politics, world, sports, entertainment and lifestyle, log on to our website latestly.com).