Arjun Kapoor Birthday: 5 Blockbusters Of The Handsome Hunk That You Can Watch Online! 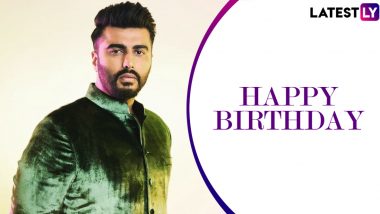 Arjun Kapoor, son of film producers Boney Kapoor and late Mona Shourie Kapoor, celebrates his 35th birthday on June 26, 2020. Born into a Punjabi family, he has a younger sister Anshula Kapoor and also has two half-sisters, Janhvi and Khushi Kapoor (born to his stepmom, late actress Sridevi). Before Arjun made his acting debut in the glamorous world of Bollywood, he worked as an assistant director. He assisted Nikhil Advani on Kal Ho Naa Ho and Salaam-e-Ishq: A Tribute to Love. The handsome hunk also worked as an associate producer on Boney Kapoor’s two productions, No Entry and Wanted. Arjun Kapoor, the Blue Eyed Boy in a Blue Suit Is Dapper and Dandy in This Throwback Photoshoot!

Arjun Kapoor signed on a three-film contract with Yash Raj Films and all of them were a hit. In 2012 he made his acting debut with YRF’s romantic drama Ishaqzaade, and until today, he has delivered some of the most entertaining films. On the occasion of Arjun’s birthday, let’s take a look at his five blockbusters and where you can watch them online. 8 Years of Ishaqzaade: Arjun Kapoor Celebrates The Milestone of His Debut, Holding the Film's Original Script.

Ishaqzaade, written and directed by Habib Faisal, featured Arjun Kapoor and Parineeti Chopra in the lead. A romantic action film, story of inter-faith lovers, both of them belonging from political families, whose rivalry for one another goes back generations. Ishaqzaade was not only a huge hit at the box office, but it the performances of the lead pair was also critically acclaimed. Ishaqzaade is available to watch online on Amazon Prime Video.

After Ishaqzaade, Arjun Kapoor featured in YRF’s action thriller Aurangzeb, which was a directorial debut of Atul Sabarwal. Kapoor essayed dual roles in this movie. This film that features an ensemble cast, including Malayalam actor Prithviraj Sukumaran as a police officer, is available on Amazon Prime Video.

Ranveer Singh and Arjun Kapoor showed a great bonding not only onscreen, but even off screen this duo share a great bond. The story revolves around Bikram (Ranveer) and Bala (Arjun), who are orphans, and later become Calcutta’s most loved and powerful Gunday. This Ali Abbas Zafar directorial movie also features Priyanka Chopra Jonas as the lead actress. You can watch Gunday on Amazon Prime Video!

After watching Arjun Kapoor in romantic and action thrillers, here comes the sweet, rom-com, a beautiful love story of Krish Malhotra (Punjabi) and Ananya Swaminathan (Tamilian). When these ‘2 States’ meet at the IIM campus, they are head over heels in love with each other. You can watch this Arjun Kapoor and Alia Bhatt starrer, an adaptation of Chetan Bhagat’s novel 2 States, on Disney+ Hotstar.

In 2017, Arjun Kapoor featured in Mohit Suri-directed teen romantic drama Half Girlfriend, in which Shraddha Kapoor is paired opposite to him. This was again based on Chetan Bhagat’s novel of the same name. Half Girlfriend is available on the streaming giant, Netflix.

So these are some of the must-watch movies of Arjun Kapoor. We must say, Arjun has won hearts in all these genres with his impeccable performance. Here’s wishing him a great birthday and a fantastic year ahead!

(The above story first appeared on LatestLY on Jun 26, 2020 12:01 AM IST. For more news and updates on politics, world, sports, entertainment and lifestyle, log on to our website latestly.com).