A video of Aryan Khan is going viral in which he is seen having a good time with his friends by playing guitar and singing to a song by Charlie Puth called “Attention”. 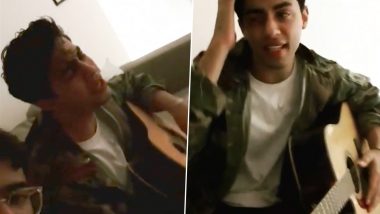 Aryan Khan might not be active on social media platforms unlike his sister Suhana Khan, but whenever this handsome son of Shah Rukh Khan and Gauri Khan puts up any posts, it takes the internet by storm. Right now we are talking about a viral video of Aryan in which he is seen having a good time with his friends by playing guitar and singing to a song by Charlie Puth called “Attention”. We must say, his guitar playing skills and singing talent is winning hearts. 5 Pictures of Aryan Khan That Had Us Drooling!

While fans were eagerly waiting to know about his acting debut or his career plans, this musical side of him has left everyone amazed. Aryan Khan is indeed a multi-talented lad just like his father. All this while one couldn’t take their eyes off his charming looks, right now all going gaga over his voice. Suhana Khan Strikes a Cute Pose with Cousin Alia Chhiba and Brother Aryan Khan!

Aryan Khan did not seem to have no trouble singing the verse of “Attention”, but he can be seen missing out on the chorus part. Hence, towards the end of the clip he is heard saying, “We need to practice.” So what is your take on this video of Aryan Khan? Share your thoughts with us in the comment section below.

(The above story first appeared on LatestLY on Dec 30, 2020 12:49 PM IST. For more news and updates on politics, world, sports, entertainment and lifestyle, log on to our website latestly.com).