Bollywood's Khiladi Akshay Kumar's upcoming film Bachchan Pandey has finally got its release date. The actor took to social media and announced that this Farhad Samji flick is all set to release on Republic Day 2022. Have a look! 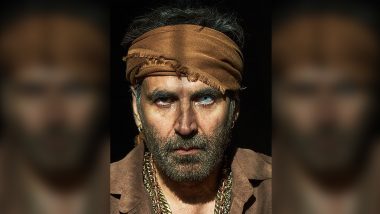 Bollywood's Khiladi Akshay Kumar's upcoming film Bachchan Pandey has finally got its release date. The actor took to social media and announced that this Farhad Samji flick is all set to release on Republic Day 2022 i.e January 26 next year. Along with the official announcement, the superstar also shared a deadly look of himself which sees the actor in a rugged bearded getup. Not to miss, Akki's blue lens. For the one's unaware, the shooting of Bachchan Pandey is currently undergoing in Rajasthan. Bachchan Pandey: Arshad Warsi Excited To Share Screen Space With Akshay Kumar For The First Time!

Elaborating on the actor's look, it is definitely raw and sees him wearing rudraksha, golden chains, earrings. Akshay captioned the picture as "His one look is enough! #BachchanPandey releasing on 26th January 2022!" FYI, Akshay will be joining hands with producer Sajid Nadiadwala for the tenth time with this movie. Bachchan Pandey: Akshay Kumar Shares a New Intriguing Look, Film to Now Release on January 22, 2021.

Earlier in a conversation with DNA, Arshad Warsi had talked about his excitement to work with Kumar for the first time. He had said, "It was just that, the director of the film Farhad (Farhad Samji). He is the person who has written most of the Golmaal series, so he is a writer. He really, really wanted Akshay and me in a film together. In this script he just said, I have to do it, it is great fun."

Apart from Akshay, Bachchan Pandey also stars Kriti Sanon, Jacqueline Fernandez, Arshad Warsi and others. Reports suggest that while Akki will be seen in a fierce role of a gangster, Kriti is said to be a journo. Well, after looking at the above picture, we are more curious to watch the final outcome. Stay tuned!

(The above story first appeared on LatestLY on Jan 23, 2021 11:58 AM IST. For more news and updates on politics, world, sports, entertainment and lifestyle, log on to our website latestly.com).