Confirmed! Mrunal Thakur to Be Paired Opposite Shahid Kapoor in Jersey Remake 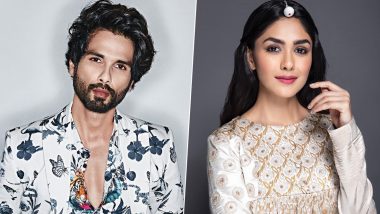 It was in mid-October when the announcement was made about the lead hero in Jersey Hindi remake. And then, it was confirmed that Shahid Kapoor will be starring in it. Since then, numerous speculations have been doing rounds with regards to the actress who would be paired opposite Shahid. It has finally been confirmed that Mrunal Thakur, who was seen in Super 30 opposite Hrithik Roshan and in Batla House opposite John Abraham, will be the female lead actress in the Hindi version of Jersey. Shahid Kapoor Is Prepping Up For Jersey Remake and The Leaked Pics Are Quite Impressive!

Jersey is a Hindi remake of the Telugu film of the same name. Gowtam Tinnanuri, the director who helmed the original film, will be directing the Hindi version as well. Nani, the actor was featured in the original film, had tweeted on October 14, “#Jersey will touch hearts one more time and this time the whole country will witness And our @gowtam19 gets to narrate and relive it again .. proud”. Fans are pretty excited about Jersey after Shahid Kapoor’s last film Kabir Singh, which was again a remake of the Telugu film Arjun Reddy. Mrunal Thakur, Sushant Singh Rajput, Vikrant Massey: Here Are Actors Who Made A Successful Move to the Movies From Television!

Talking about roping in Mrunal Thakur for Jersey, director Gowtam Tinnanuri said, “After Shahid came on board, I only had Mrunal on my mind for the lead opposite him, I loved her performance and confidence in Super 30 opposite Hrithik Roshan and felt she’s perfectly fit for the part in Jersey and will do full justice to the role,” reports IANS. Mrunal Thakur on being a part of the film told the agency, “I’m super excited to play the lead opposite Shahid in Jersey. When I saw the original film I was bowled over by its passionate emotional journey.”

Trailer Of The Telugu Film Jersey

Mrunal Thakur also said, “It felt like I had lived a full lifetime of experiences in those two-plus hours. So deep was the affect of the film on that I couldn't get it out of my heart the whole night so I immediately watched it again the next day, I can't wait for Hindi audiences to experience a similar impact!” This upcoming project will be produced by Allu Aravind, Aman Gill and Dil Raju. The film is scheduled to be released in August 2020.

(The above story first appeared on LatestLY on Nov 19, 2019 10:03 AM IST. For more news and updates on politics, world, sports, entertainment and lifestyle, log on to our website latestly.com).