Farhan Akhtar Posts a Video of Shibani Dandekar and Says, ‘You’re The One That I Want’ 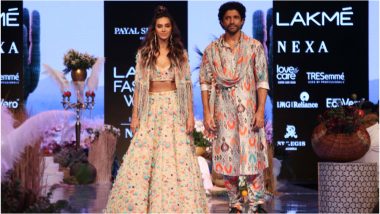 Farhan Akhtar and Shibani Dandekar have grabbed all the limelight, courtesy their PDA moments on social media. Although they haven’t said anything about their affair, their pictures speak volumes. The two are not shy to make any outings nor do they refrain from posting any pictures or videos on social media platforms. Once again Farhan has shared an adorable video on Instagram of his ladylove walking the ramp, but it is the caption that has melt everyone’s hearts.

The video of Shibani Dandekar that Farhan Akhtar has posted is from the recently concluded Lakme Fashion Week Winter Festive 2019. Shibani and Farhan walked the ramp as a couple for the first time and fans couldn’t stop gushing about this lovely duo. The lovely pair were the showstoppers for designer Payal Singhal. Talking about the video that Farhan shared, he has captioned it as, “You’re the one that I want @shibanidandekar #payalsinghal”. And just like him, even we’re all hearts for it.

Earlier this year there were rumours that Farhan Akhtar and Shibani Dandekar are planning to get hitched. However, the duo have never spoken about it. But on Tape Cast Season 2 when Farhan was asked about his relationship with Shibani he said, “She is an amazing woman. It’s been very special, the last year... You know we’ve been getting to know each other and I couldn’t be happier about it.” Stay tuned for more updates from the world of entertainment!

(The above story first appeared on LatestLY on Sep 06, 2019 12:04 PM IST. For more news and updates on politics, world, sports, entertainment and lifestyle, log on to our website latestly.com).