The filmmaker was headlining the news when reports came out that he has tested positive for Covid-19. The filmmaker has quarantined himself and the shoot for the Alia Bhatt starrer has come to a halt. 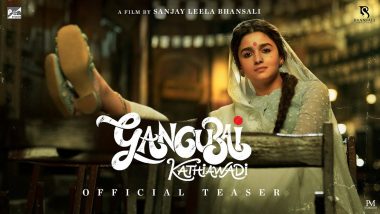 Sanjay Leela Bhansali often finds himself in a pickle when it comes to his movies. His film with Deepika Padukone titled Padmaavat dragged a lot of controversies before its release and something very similar is happening with his upcoming film as well. The director who has been working with Alia Bhatt on Gangubai Kathiawadi has been dealing with one issue after another while the shoot of the film. The latest buzz is that the film has landed in trouble once again. Gangubai Kathiawadi: Ajay Devgn to Join Alia Bhatt’s Team for the Shoot From February 27.

Maharashtra Congress MLA Amin Patel on Monday (March 8) raised concerns regarding the title of the film during the state assembly. He demanded that the title of Sanjay Leela Bhansali’s should be changed as it is slandering the name of Kathiawad city. He added that things have changed now and the people of Kathiawad have progressed in life. He said that the women of Kathiawad have even ventured into different professions and it is not right for the makers of the Alia Bhatt film to title the film Gangubai Kathiawadi.

Amin Patel, who represents the Mumbadevi constituency in South Mumbai said, "It is not the same like it was in 1950s. Women there are excelling in different professions. The film’s title also maligns the name of Kathiawad city. The name of the film should be changed." The film will see Bhatt portray the character of Gangubai, who was the godfather of Kamathipura brothel. The MLA urged the state government to look into this matter immediately. Gangubai Kathiawadi Teaser: Alia Bhatt Looks Impressive As the 'Godmother' of Kamathipura.

The filmmaker was headlining the news when reports came out that he has tested positive for Covid-19. The filmmaker has quarantined himself and the shoot for the Alia Bhatt starrer has come to a halt. The actress is under quarantine, too. "SLB has tested positive for Covid-19, and he is under self-quarantine, Alia too has quarantined herself since SLB and Ranbir both have tested positive. Everybody who has come in contact with Sanjay has taken the test," a source close to the film's team told indianexpress.com earlier on Tuesday.

(The above story first appeared on LatestLY on Mar 10, 2021 08:45 PM IST. For more news and updates on politics, world, sports, entertainment and lifestyle, log on to our website latestly.com).