Gehraiyaan starring Deepika Padukone, Siddhant Chaturvedi, Ananya Panday and Dhairya Karwa in the lead, this is one of the most-awaited movies of the year directed by Shakun Batra. 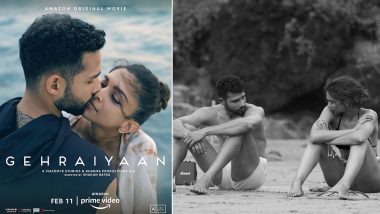 Gehraiyaan is the upcoming film that revolves around ‘complex modern relationships, adulting, letting go’ and much more. We got to catch a glimpse of this relationship drama when the makers had dropped the film’s announcement video. Starring Deepika Padukone, Siddhant Chaturvedi, Ananya Panday and Dhairya Karwa in the lead, this is one of the most-awaited movies of the year directed by Shakun Batra. Movie buffs are thrilled about the upcoming film, but right now, Twitterati is amazed about something else. Netizens are curious to know about the ‘intimacy director’ that’s been added in the credits of the film. This is not something we usually see in credits. Gehraiyaan: Deepika Padukone-Siddhant Chaturvedi Look Madly In Love With Each Other In These New Posters; Film’s Release Date Postponed To February 11.

The audience have already seen a glimpse of intimate scenes between Deepika Padukone and Siddhanth Chaturvedi in the upcoming film Gehraiyaan. This is the first time that the two have come together for a movie, however, their chemistry looks realistic and the credits to make all this look so effortless goes to Dar Gai, who has been roped in as the film’s intimacy director.

Intimacy directors have to understand an actor’s comfort and put them at ease and shed their inhibitions. These directors choreograph various intimate scenes much aesthetically. Be it just a kiss or a physical touch or a scene that features nudity, the intimacy directors have to ensure the atmosphere around keeps the performers relieved. And all is done with consent of the actors.

First Time To See Credit For An Intimacy Director

I could be wrong, but is it the first time I have seen a credit for an “Intimacy Director” in an Indian film (or any other film)? I know Dar Gai and am really curious about her contribution to this film. pic.twitter.com/eTCZ12hZly

Intrigued To See It

This is v interesting to see. I know of Normal People, I May Destroy You & Sex Education having intimacy director/coordinator and you could see how that shaped the series. I think it’s a first for Indian movie too or atleast credited. I’m really setting the hype for Gehraiyaan 🤞🏽 https://t.co/A8OdXhUSGq

In an interview to HT Brunch, director Shakun Batra had stated, “The presence of an intimacy director just makes the whole shoot atmosphere more comfortable and protective for the performer. As filmmakers and storytellers, as we step into this new territory, it’s important that we define the rules and boundaries for all.” Gehraiyaan, directed by Batra, is all set to be premiered on Amazon Prime Video on February 11.

(The above story first appeared on LatestLY on Jan 05, 2022 03:47 PM IST. For more news and updates on politics, world, sports, entertainment and lifestyle, log on to our website latestly.com).