The movie also stars Bobby Deol, Riteish Deshmukh, Kriti Sanon, Pooja Hegde, Kriti Kharbanda, Rana Daggubati and Nawazuddin Siddiqui. Taran Adarsh has tweeted saying that not just Housefull 4, even Saand Ki Aankh and Made in China have seen an upward trend in their collections on Monday. 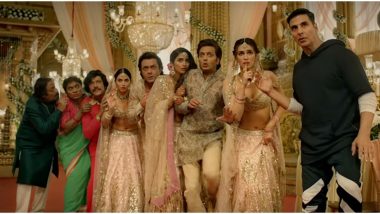 October 28, 2019, has been manna for all the big Diwali releases. Being the main Diwali day and a public holiday, most of the films that came out on October 25 have seen massive footfalls on this day. But not so much as Housefull 4. Being the biggest Bollywood Diwali release, while also getting the maximum screens of 3900, Housefull 4 had recorded its highest earnings since its release on its first Monday. Housefull 4 Box Office: Akshay Kumar and Kriti Sanon's Multi-Starrer Comedy Drama Earns Rs 53.22 Crores in 3 Days.

The Akshay Kumar-starrer earned about Rs 34.56 crore on these days, making its collections to Rs 87.78 crore in India. The movie had reportedly earned Rs 53.22 in the first three days, though some of the trade trackers, like Sumit Kadel, feel that the collections have been inflated to the tune of Rs 15-17 crore. He had tweeted on October 26, "Its high time inflation in collection should be stopped ,this malpractice gives bad name to the industry. It is happening since years. 50 lakh-1 cr up down is acceptable as no one has exact data from Single screens, but 2-3 cr per day inflation is shamefull. (sic)" From Shah Rukh Khan’s Ra.One to Akshay Kumar’s Housefull 4, Eight Films of This Decade That Didn’t Turn Out to Be the Colourful Diwali Blockbusters That We Expected.

Meanwhile, trade analyst Taran Adarsh has tweeted saying that not just Housefull 4, even Saand Ki Aankh and Made in China have seen an upward trend in their collections on Monday. With offices resuming from Tuesday, it would be interesting to see how these films would fare in the week ahead.

Housefull 4 is directed by Farhad Samji, who had taken over the reins from Sajid Khan after the latter was implicated over sexual harassment charges. The movie also stars Bobby Deol, Riteish Deshmukh, Kriti Sanon, Pooja Hegde, Kriti Kharbanda, Rana Daggubati and Nawazuddin Siddiqui. The movie is reportedly the most expensive instalment in the Housefull franchise, made on an estimated budget of Rs 100 crore, and needs to earn more than Rs 150 crore to be called a hit.

(The above story first appeared on LatestLY on Oct 29, 2019 11:01 AM IST. For more news and updates on politics, world, sports, entertainment and lifestyle, log on to our website latestly.com).