Irrfan Khan Wraps Up Angrezi Medium; Director Homi Adajania Cracks a Joke on the Actor in a Perfect Farewell Note

After a long shooting schedule, Irrfan Khan and Homi Adajani have wrapped up the shooting of their film, Angrezi Medium. The movie is a sequel to Hindi Medium and also stars Kareena Kapoor and Radhika Madan. As a parting note, Homi shared an Instagram post, which is both emotional and funny. 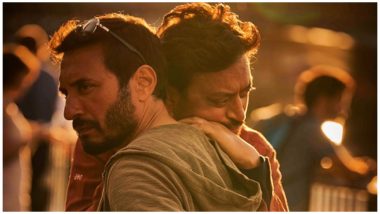 Irrfan Khan's battle with neuroendocrine tumour shook his fans to the core. But the actor is all set to bounce back and how. He started shooting for the sequel of his hit film, Hindi Medium some time back. The movie, titled Angrezi Medium, wrapped up it's shooting today. Of course, it must have been an emotional moment for the entire crew. Director of the film, Homi Adajania, expressed the very sentiment on his Instagram page as she shared a picture with Irrfan. Homi announced the film's wrap and said that it has been a roller coaster ride of emotions. Kareena Kapoor Khan's Sassy Slow-Mo Walk on The Sets of Angrezi Medium Makes Us Eager For 'Naina' (Watch Video).

But the post was not all emotional. Homi even managed to put in a joke there. He took a jibe at Irrfan, saying, "Irrfan Khan, you are incredible ... and you’re a decent actor as well" Well, OBVIOUSLY, this is a joke. Because Irrfan is a better actor than many current Bollywood actors combined. Angrezi Medium: Irrfan Khan’s Character to Be Very Memorable, Says Dinesh Vijan.

In the picture, we can see Irrfan and Homi in a warm embrace. Check out the picture below:

I wanted to do this film knowing it would be against the odds. I wanted to do it for all the wrong reasons to make a film but they just seemed so right and still do. It’s been an emotional roller coaster more than anything else and I know how hard it’s been for everyone. Irrfan Khan, you are incredible ... and you’re a decent actor as well 😂. I love you more than I know how to say. Thank you to my crew and cast for not letting the odds stack up against us. I truly believe that our collective positivity and celebration of life allowed us this. Regardless of this film’s fate, it’s shown me a lighter way of being and I’ll always cherish this. 😊🙏 #itsawrap #angrezimedium #adioslondon @irrfan #iflifegivesyoulemonsgrabsometequila 📷 @harjeetsphotography @maddockfilms 🙏 #dineshvijan

Angrezi Medium stars Radhika Madan playing the daughter of Irrfan Khan. Kareena Kapoor Khan also stars in the film, making this her first appearance with Irrfan. She plays the role of a UK cop. We are eagerly looking forward to this new chapter in the Hindi Medium franchise and in Irrfan's life.

(The above story first appeared on LatestLY on Jul 12, 2019 11:26 PM IST. For more news and updates on politics, world, sports, entertainment and lifestyle, log on to our website latestly.com).