Shahid Kapoor's sports drama Jersey released today in theatres. As per reports, this film is the latest victim of online piracy. Just hours after its release, Jersey has been leaked online for free watch and download. 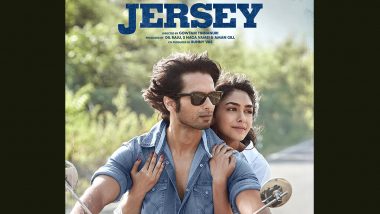 Gowtam Tinnanuri has made his Hindi directorial debut with Jersey, the film that was originally made by him in Telugu starring Nani in the lead. The Hindi remake, which released in theatres today, starred Shahid Kapoor in the lead. The film also featuring Mrunal Thakur and Pankaj Kapur has been hailed by critics for the impressive narrative and performances. However, within few hours of its release in theatres, Jersey has got leaked online. The film is now available for streaming on torrent sites. As per reports, there's an HD print available of the movie to watch online. Jersey Movie Review: Shahid Kapoor & Pankaj Kapur's Solid Partnership Makes This Predictable Game An Engaging Watch.

Jersey full movie in HD has been leaked on several torrent sites like Filmywap, Onlinemoviewatches, 123movies, 123movierulz, Filmyzilla, and other pirated versions of the series in HD (300MB free download in 1080p, 720p, HD online) are available for the audience to watch.

Apart from Jersey, there are several other movies and series that have too become the victims of online piracy. It includes the recently released KGF 2, The Batman, Beast among others that have also been leaked online and made available in HD prints.

(The above story first appeared on LatestLY on Apr 22, 2022 10:36 AM IST. For more news and updates on politics, world, sports, entertainment and lifestyle, log on to our website latestly.com).