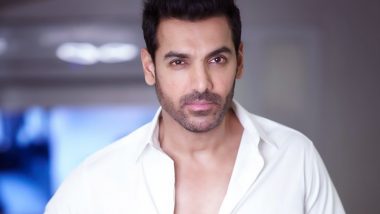 Actor John Abraham says while social media is relevant today, he is not someone who would post details of his personal life. "I was a media planner in an ad agency and I believe in the power of social media. It is very relevant. If I have to make an announcement, I would look at the digital route. But I am very resistant to using it for personal pictures," John told IANS. Mumbai Saga Review: Netizens Hail John Abraham and Emraan Hashmi’s Performances in the Gangster Film!

The actor says that he is not someone who would update fans with everything he does on a daily basis. "I hold back. I don't say much. Once in a while you will see a candid picture that blows up in the face. I stick to my business. I don't announce when I go to the toilet or what I eat. I probably shy away from it," he says. Box Office: Mumbai Saga Takes A Lead Over Sandeep Aur Pinky Faraar With 10-12% Occupancy.

A few weeks back, John had posted a picture where he posed with just a pillow. Talking about the image, he says he had no idea people would love it so much. "It was just so casual, I wasn't even posing. We just shot it and I didn't expect people to take to it like they did. I realised people like candid pictures more than structured shoots. If you see that picture, there is a lot of innocence. It is not meant to scintillate," he says.

(The above story first appeared on LatestLY on Mar 19, 2021 07:56 PM IST. For more news and updates on politics, world, sports, entertainment and lifestyle, log on to our website latestly.com).