Subhash Ghai’s film Khal Nayak, released in 1993, was the second highest grossing film of that year. It starred Sanjay Dutt, Madhuri Dixit-Nene and Jackie Shroff in the lead roles. 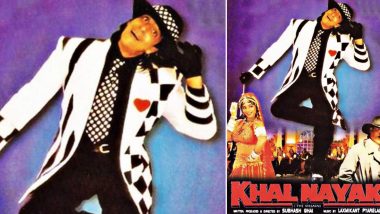 Subhash Ghai’s film Khal Nayak, released in 1993, was the second highest grossing film of that year. Starring Sanjay Dutt, Madhuri Dixit-Nene and Jackie Shroff in the lead roles, this film had the perfect dose of action and drama. Khal Nayak ended showing Balaram Prasad aka Ballu (Dutt) going behind the bars and in the second part he’ll be seen coming out of the prison, confirms Subhash Ghai. The director has revealed to a leading tabloid that there will be Khal Nayak sequel. Tiger Shroff to Play Jackie Shroff's Son in Khalnayak Sequel?

In an interview to Mirror, filmmaker Subhash Ghai shared how he utilised this lockdown period to worked on the script for Khal Nayak sequel. Besides this sequel, he will also remake the film Kalicharan, which was his directorial debut. The filmmaker was quoted as saying, “For the last six-seven months we have only been creating content and now, I’m ready with two bound scripts—a sequel to Khal Nayak and a remake of my first directorial, Kalicharan”.

Regarding Khal Nayak sequel he was further quoted as saying, “Part 2, which took us two years to script, starts with Ballu coming out of prison. It will also feature a younger villain.” We wonder who will be that younger villain in part 2! Besides this, Subhash Ghai also mentioned that the cast for this sequel will be a promising one just like the original. Stay tuned for more details on Khal Nayak sequel and other updates from the world of entertainment.

(The above story first appeared on LatestLY on Apr 27, 2020 09:58 AM IST. For more news and updates on politics, world, sports, entertainment and lifestyle, log on to our website latestly.com).