Maanayata Dutt took to social media and posted a heartfelt note for husband Sanjay Dutt on Dussehra 2020. amd it's a must-read. Check it out. 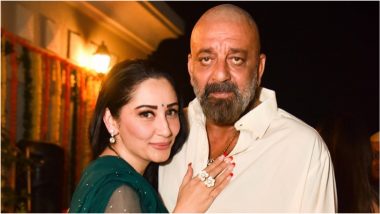 October 25 is celebrated as Dussehra in India which is all about how good won over the evil. Talking on the same lines, if there is someone from Bollywood who has gone through testing times then it has to be Sanjay Dutt. The superstar who was diagnosed with cancer, recently announced that he is free from the deadly disease. And so today, on the auspicious occasion Vijayadashami, Sanjay's wife Maanayata penned an emotional note for him on Instagram. Sharing a video of the puja ritual on a festive day, she called Sanjay her Ram. Sanjay Dutt Beats Cancer: Akshay Kumar Is Elated With the Good News and Excited to Meet Baba on the Sets of Prithviraj (View Tweet).

In the long post, Maanayata poured her heart out and explained how Sanju has been a strong inspiration in her life who has taught her to never give up. Must say, each and every word in her post spoke the amount of love she has for the actor. "There is truly no one like you Sanju, you taught me when the going gets tough, only the tough get going. You are my strength, my pride, My Ram!!," a part of her post read. Sanjay Dutt's Wife Maanayata Dutt Thanks Fans For Good Wishes, Requests To Stop Speculating About His Health.

Dedicating this Dusshera to someone who has been such an inspiration not only to me, but to so many others. Life has thrown many difficulties at him, but he has always fought back with patience, grace and love. And when we thought we finally had peace, life threw yet another challenge. Today he has once again proven that a positive mind can win and conquer the worst situation with resilience and courage! There is truly no one like you Sanju, you taught me when the going gets tough, only the tough gets going. You are my strength, my pride, My Ram!! #vijayadashami bhava!! Wishing everyone peace and prosperity #love #grace #positivity #dutts #beautifullife #thankyougod 🙏

Well, we wish more power to the Dutt's. Meanwhile, on the professional front, Sanjay Dutt will start shooting for his next KGF Chapter 2 in the month of November. However, that's not it as he also has many other projects ahead which incudes Prithviraj, Torbaaz, Bhuj: The Pride Of India and Shamshera. Stay tuned!

(The above story first appeared on LatestLY on Oct 25, 2020 04:08 PM IST. For more news and updates on politics, world, sports, entertainment and lifestyle, log on to our website latestly.com).