Mila Singh's partnership with Salman Khan has always fetched superhit results. And as the singer celebrates his birthday on June 10, we list some of his chartbuster tracks which he crooned for bhaijaan that needs to be on your playlist now. 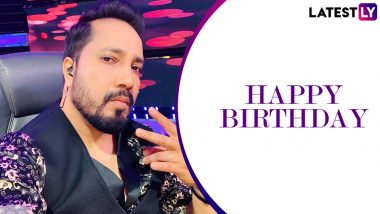 Mika Singh is a well-known singer from Bollywood. The ace artist can literally be termed as the God of churning desi party numbers that become instant hits. He has a unique voice which is his USP. Mika entered the filmy world in the late 90s and since then has been making fans dance to his energetic songs. Over the years, the singer has collaborated with many A-list actors, but his partnership with Salman Khan has always fetched superhit results. And as Mika celebrates his birthday on June 10, we list some of his chartbuster tracks which he crooned for bhaijaan that needs to be on your playlist now. So, let’s get started. Mika Singh: Get Off Social Media and Help People Amidst the COVID-19 Pandemic.

From the movie Bodyguard, this song was actually a rage when released. Mika’s voice blends in perfectly well with the superstar’s crazy antics and dance steps. A fun tune for sure.

A perfect song for couples, this Mika creation took to the internet by storm as it connected with many youths out there. Asin and Salman star in the track wherein they take you on a January to December ride. Watch!

This number one can be tagged as the most loved song of Salman and Mika. The beats, music, and of course the unique voice make this a perfect hit. It sees Jacqueline Fernandez opposite Sallu. Rakhi Sawant and Mika Singh Meet on a Friendly Note Years After Their Infamous ‘Kiss-Gate’ Controversy (Watch Video).

A must-have Eid song from the movie Bajrangi Bhaijaan, this one definitely gives you a positive vibe. It also will make you dance as soon as you hear it. Mika’s voice stands out so well here!

This Salman and Anushka Sharma’s song from the film Sultan was a hit then. The traditional and upbeat flavour of the track makes it hummable even after so many years. Listen!

That’s it, guys! These are some of the songs that shout out Mika and Salman. Each melody has its own charm and even though sung by the same singer does not feel repetitive or similar. Happy birthday, Mika Singh!

(The above story first appeared on LatestLY on Jun 10, 2021 08:20 AM IST. For more news and updates on politics, world, sports, entertainment and lifestyle, log on to our website latestly.com).