Mumbai Saga and Chehre: Emraan Hashmi Opens Up on His Two Major Projects, Says ‘This Year Is Interesting and I Am Very Proud of These Releases’

Emraan Hashmi is back in the spotlight. Two major projects -- Mumbai Saga and Chehre - are ready for release, and unconfirmed reports suggest he could be Salman Khans villain in Tiger 3. He also has a supernatural thriller titled Ezra coming up. 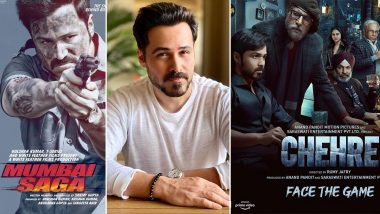 Emraan Hashmi is back in the spotlight. Two major projects -- Mumbai Saga and Chehre - are ready for release, and unconfirmed reports suggest he could be Salman Khan's villain in Tiger 3. He also has a supernatural thriller titled Ezra coming up. As per modest trade estimates, the actor has Rs 200-250 crore riding on him. Emraan is more interested in the audience reaction to his upcoming mix of films. Chehre: Makers Release Annu Kapoor’s Look from Amitabh Bachchan-Emraan Hashmi Starrer on His Birthday!

"This year is interesting. I am very proud of these releases. There is Mumbai Saga, Chehre and the horror film, Ezra. It's a mixed bag and I am waiting for them to release and have people enjoy them. After 20 days of Mumbai Saga releasing, we have Chehre coming. I am looking forward to my films," he says. Mumbai Saga Teaser: It’s John Abraham VS Emraan Hashmi In This Action-Packed Gangster Drama! (Watch Video).

His forthcoming roster is spread over the next several months and could define the shape of things to come for the actor, who gave the Bollywood mainstream hero one of its most maverick antihero twists in his early years, as the industry's Serial Kisser.

Although Emraan also has Shyam Madiraju's offbeat crime drama Harami in his upcoming roster, that film has been more about winning over the global festival circuit so far, than giving his Bollywood career any sort of a push. Among his commercial line-up only Ezra is a solo starrer, but that film belongs to his favoured horror genre, which has given him some of his biggest hits by way of the Raaz films. All other upcoming films are multi-hero projects.

Chehre sees him team up with Amitabh Bachchan, and the Rumy Jafry film also has the other 'co-star' who has never failed Emraan -- catchy music. The presence of Rhea Chakraborty in the cast has added curiosity to the film, slated for an April 9 release.

Mumbai Saga is Sanjay Gupta's new gangster drama that primarily pits Emraan's obsessed cop against John Abraham's don Amartya Rao. The film is slated to release on March 19. Finally, Tiger 3 is very much a Salman Khan-Katrina Kaif vehicle, but reports have suggested that Emraan could be essaying a very distinct villain in the film. The actor himself is guarded about Tiger 3. Asked if he has signed the film, he said: "I will talk about it when things are clear."

All these films are multi-hero projects that have interesting roles for him. In his early 40s now, Emraan perhaps knows going solo is not always a prudent idea in a box office scenario that is increasingly getting unpredictable (his last solo release was Why Cheat India, a film that grossly underperformed at the box office upon release in 2019).

Also, for most of his career, Emraan invariably shone in multi-hero projects. Random recall would bring back Murder, The Dirty Picture, Once Upon A Time In Mumbai, Aashiq Banaya Aapne, Kalyug, Aksar, Gangster, and Raaz: The Mystery Continues. Teaming up with Big B, Salman or John could pay off.

(The above story first appeared on LatestLY on Mar 16, 2021 10:01 AM IST. For more news and updates on politics, world, sports, entertainment and lifestyle, log on to our website latestly.com).