Sofia Hayat Angry on Comparisons With Sana Khan, Says ‘I Am More Spiritual in My Nudity Than Fully Dressed’

For the uninitiated, Sofia had announced that she is converting into a nun back in 2016. However, a year after this announcement, she married Romanian interior designer, Vlad Stanescu. 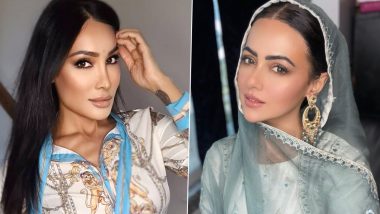 A month after announcing her departure from the entertainment industry, Sana Khan took the internet by a storm once again when she announced her marriage with Anas Sayed recently. The couple got hitched on November 20 in an intimate wedding and have become the talk of the town. She also got compared to Former Bigg Boss contestant Sofia Hayat as well. Many people on the internet called Sana the next Sofia Hayat as well. Reacting to this, former singer Sofia Hayat has now reacted to these baseless analogies. Sofia Hayat Responds to the Claims of Hurting Religious Sentiments Due to Her Semi-Nude Instagram Pic.

Sofia expressed her anger and explained how spirituality can mean different things to different people. In an exclusive chat with SpotboyE, the singer said, "I am fed up with my comparison to Sana Khan. What is wrong with some people. They think spirituality is all about what dress you wear! When I was a nun, I did not have sex for 18 months.”

She went on to say, "Now, I do not wear my nun's outfit every day...does not make me less spiritual. I am more spiritual in my nudity than fully dressed, low-minded, and low vibrational people, do not understand this. I have not had sex in 3 years. I am still Mother Sofia and still spiritual.'

For the uninitiated, Sofia had announced that she is converting into a nun back in 2016. However, a year after this announcement, she married Romanian interior designer, Vlad Stanescu. The couple parted ways in 2018 after Sofia accused Vlad of infidelity. Sana Khan Quits Showbiz: Muzamil Ibrahim, Ridhi Dogra, Divya Agarwal, Salman Yusuff Khan Support Former Bigg Boss Contestant.

As for Sana, before announcing her retirement from films, she was in the news for her relationship with Melvin Louis. The actress had accused the choreographer of cheating on her and duping money from several girls. She claimed that Melvin had even tried to forcefully have intimate relationships with many of his students.

(The above story first appeared on LatestLY on Nov 24, 2020 11:48 PM IST. For more news and updates on politics, world, sports, entertainment and lifestyle, log on to our website latestly.com).