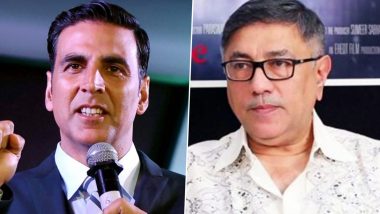 Filmmaker Suneel Darshan goes down memory lane to recall his long association with Bollywood superstar Akshay Kumar. "We commenced our fruitful association with Jaanwar, which was Akshay's first success after a dull period in 1999. Then with Ek Rishtaa he went notches higher to be pitted against Amitabh Bachchan and carry off the role with full conviction. These movies were followed by Haan Maine Bhi Pyaar Kiya, Andaaz, Talaash, Mere Jeevan Saathi and Dosti Friends Forever," recalls Darshan. Waqt-The Race Against Time Clocks 16 Years: Vipul Shah Recalls How Amitabh Bachchan and Akshay Kumar Offered To Waive Off Fees.

While on Ek Rishtaa, which released in 2001, the success of the film was followed by Big B and Akshay collaborating again in films like Vipul Shah's Aankhen (2002) and Waqt: The Race Against Time (2005), and Rajkumar Santoshi's Khakee (2004). Laxmii Movie Review: Sharad Kelkar the Only Spark in Akshay Kumar, Kiara Advani’s Horror-Comedy That’s Otherwise a Complete ‘Bomb’!

(The above story first appeared on LatestLY on May 14, 2021 10:38 PM IST. For more news and updates on politics, world, sports, entertainment and lifestyle, log on to our website latestly.com).