Sushant Singh Rajput and Rhea Chakraborty were Hunting for a House Before their Wedding This Year, Reveals her Broker 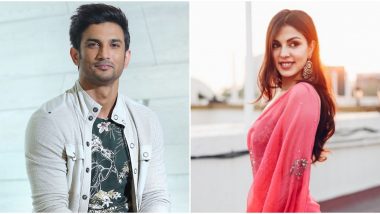 Sushant Singh Rajput was fiercely protective about his personal life and leaving Ankita, he never really opened up about any of his relationships. The actor was currently rumoured to be dating Half Girlfriend actress Rhea Chakraborty and their different pictures on Instagram were enough proof for the same. And while he never tagged her as his girlfriend, a real estate broker who had previously helped the actress find a suitable apartment revealed the couple was in fact dating and were planning to get married this year. Sushant Singh Rajput's Viral and Now Deleted Tweets Hours Before his Suicide are Fake, Clarifies Twitter.

In his interaction with Navbharat Times, the broker revealed that Rhea and Sushant were hunting for the right apartment as they were planning to settle down this year. "Sushant and Rhea were about to get married. And so they were looking for a house in Bandra," he said in his conversation with the regional daily. Considering she was his old client, she had asked him to help them find the perfect apartment, despite the actor owning a sea-facing penthouse in Bandra.

Earlier, Sushant's cousin brother had revealed details about his upcoming wedding and how the actor was planning to tie the knot this year. There were also reports about the actor asking Rhea to move-in with her but she was a bit apprehensive then. And while you may tag these stories as rumours, let's not deny that he had signed his next with his rumoured girlfriend. Sushant Singh Rajput’s Demise: Ram Gopal Varma Defends Karan Johar After Netizens Blame Him for Nepotism (View Tweets).

As per filmmaker Rumy Jafry, Sushant and Rhea were supposed to star in his rom-com and the shooting of which was expected to start in May. However, after the coronavirus scenario, the makers had to push ahead their schedule indefinitely. Meanwhile, Sushant's last release will be Dil Bechara, an official remake of Hollywood movie The Fault in our Stars.

(The above story first appeared on LatestLY on Jun 16, 2020 09:30 PM IST. For more news and updates on politics, world, sports, entertainment and lifestyle, log on to our website latestly.com).