Directed by Anees Bazmee, Naam had Ajay Devgn in the lead, with Sameera Reddy and Bhumika Chawla playing the heroines. 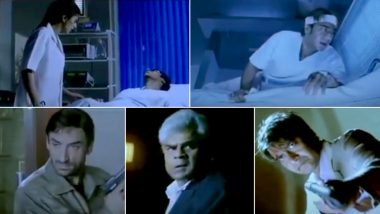 The most painful aspect for an actor or a director or any of the crew member working on a film is for the movie to not release and just lie in the cans. We have heard accounts of how films have been dropped midway of shooting for various reasons, like actor-director spat or financial constraints. One such movie is Naam. Directed by Anees Bazmee, Naam had Ajay Devgn in the lead, with Sameera Reddy and Bhumika Chawla playing the heroines. Bhool Bhulaiyaa 2: Anees Bazmee Says Audience Will Get to See Tabu in a Never Seen Before Avatar.

Naam was supposed to be the fourth collaboration between Devgn and Bazmee, after Hulchul (not the Akshaye Khanna one), Pyaar Toh Hona Hi Tha, and Deewangee. Earlier titled as Benaam, the movie saw a title change as the shooting progressed and was completed around 2004. But the movie hasn't seen the light of the day till now. In an interview to IndiaFM, the director put the blame on the producer, as he said, "Mr Dinesh Patel, the producer will be the best person to answer that question. The film is complete now and the producer is finalizing the release."

16 years later, Naam is still to find a release date. Last October, Bazmee had shared a working still from the movie, while expressing the hope that it would release some day.

Now we have come across what happens to be the trailer of the film. Going by the looks of it, Naam looks to be a suspense action thriller, where Ajay Devgn's character seems to have lost his memory and tries to piece back his old life while facing foes forgotten. The amnesiac hero is something we have seen in quite a few movies, like Salman Khan's Tumko Na Bhool Payenge, Aamir Khan's Ghajini and Arjun Rampal's Yakeen. So we are curious to see what different stuff Bazmee has in store for Devgn.

The film was edited by Shirish Kunder who later turned a director himself, while Himesh Reshammiya had scored the music for the film. Rahul Dev, Yashpal Sharma and the late Sharat Saxena were also part of the cast. While a theatrical release makes no sense, we do wish that Naam makes its way to an OTT platform soon, considering Bazmee himself confirmed that the movie is completed.

Interestingly, Naam is not the only movie of Anees Bazmee that is stuck in the cans. There is also Radheshyam Sitaram, a romantic adventure film that had Suniel Shetty and Aishwarya Rai in the lead. Then there is It's My Life, a remake of the 2006 Telugu film Bommarillu, that had Harman Baweja, Genelia D'Souza and Nana Patekar in the lead. Popular Television personality Kapil Sharma was supposed to make his big-screen debut with this movie as a comedian.

(The above story first appeared on LatestLY on Apr 16, 2020 07:36 PM IST. For more news and updates on politics, world, sports, entertainment and lifestyle, log on to our website latestly.com).