Cara Delevingne Says 'Will Always Remain Pansexual, He or She, I’ll Fall in Love with the Person’ 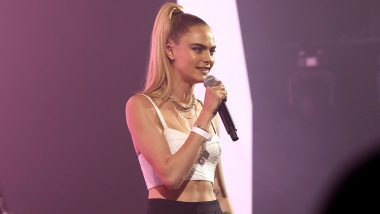 Actress Cara Delevingne has opened up about being pansexual, and says she falls in love with the person, not the gender. "I always will remain, I think, pansexual," variety.com quoted Delevingne as saying. "However one defines themselves, whether it's ‘they' or ‘he' or ‘she' I fall in love with the person -- and that's that. I'm attracted to the person," she added. In 2018, Delevingne told her fans that she identified as sexually fluid. Riverdale Actress Lili Reinhart Comes Out as a ‘Proud Bisexual Woman’ in A Post Supporting the #BlackLivesMatter Movement.

"I never thought I needed to come out. It was just kind of like, ‘This is who I am. Just so you know'," she said. Delevingne remembers growing up "in an old-fashioned, repressed English family", adding that there was a period of time where she "didn't want to admit who I was". She said: "I grew up in an old-fashioned, repressed English family. And I used the word ‘gay' to describe things which were s**t all the time: ‘That's so f***ing gay of you, man'. Everyone used to talk about ‘Oh, my God, imagine going down on a woman'. I'd be like, ‘That's disgusting'. Moana Star Auli’i Cravalho Comes Out as Bisexual on TikTok Lip-Syncing to This Eminem Song!

I think that came from the fact that I just didn't want to admit who I was. I didn't want to upset my family. I was deeply unhappy and depressed. When you don't accept a part of yourself or love yourself, it's like you're not there, almost."

"Once I could talk about my sexuality freely, I wasn't hiding anything anymore," the actress said while recalling her fear of revealing that she was attracted to women to her father after one heartbreak. "I was honestly terrified," she said, adding she thought he might kick her out of the house. Instead, she found acceptance. "He was like, ‘She isn't worth the energy. You deserve to be loved'. He was so sweet, I could cry about it right now," she said.

(The above story first appeared on LatestLY on Jun 04, 2020 05:59 PM IST. For more news and updates on politics, world, sports, entertainment and lifestyle, log on to our website latestly.com).