Cruella Trailer: Emma Stone Makes for a Menacing Disney Villain No Dalmatian May Want to Mess With (Watch Video)

Disney just drops the official trailer of Emma Stone starrer Cruella, a live-action movie on the iconic Disney villain Cruella de Vil. Emma is seen in a never seen before avatar in this crisp one and a half minute trailer as we see her go badass in quick time. 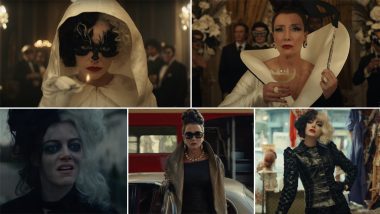 Disney just dropped the official trailer of Emma Stone's Cruella, a live-action movie which acts as an origin story to is iconic villain Cruella de Vil, the main antagonist of 101 Dalmatians. Emma, not someone we associate with playing a baddie, is seen in a never-seen-before avatar in this crisp one and a half minute trailer. The trailer introduces Emma Stone as Cruella with her voiceover that says "The thing is I was born brilliant, born bad and a little bit mad." Glenn Close had played the same role in the popular 101 Dalmatians live-action films. Cruella Poster: Emma Stone Is Absolutely Unrecognizable as her First Look from Walt Disney Film is Officially Out.

Set in the 70s, the trailer showcases how a beautiful fashionista turns into a menacing psychopath with an absolute punk. The vibe of the trailer is quite dark but we love seeing the Oscar-winning actress in this unseen shade. With Disney succeeding with Maleficent, the prequel to Sleeping Beauty, that focused on the Witch humanising her, Cruella could share a similar fate at the box office. Emma Stone: Being ‘Cruella’ in New Film was Fun.

Check Out Cruella's Official Trailer Below:

Cruella is helmed by Craig Gillespie and it also stars Emma Thompson, Emily Beecham, Joel Fry, Kirby Howell-Baptiste and Mark Strong in major roles. The character of Cruella was first introduced in Dodie Smith’s 1956 novel The Hundred and One Dalmatians. It was later made to a movie franchise with 101 Dalmatians and its sequel 102 Dalmatians, and Cruella is the live-action prequel to these movies. Cruella is all set for May 28, 2021 worldwide release.

(The above story first appeared on LatestLY on Feb 17, 2021 07:43 PM IST. For more news and updates on politics, world, sports, entertainment and lifestyle, log on to our website latestly.com).