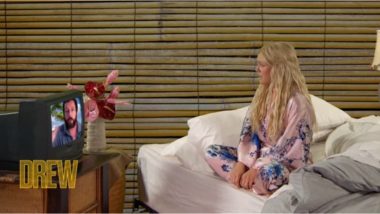 Drew Barrymore and Adam Sandler have reunited for a reboot of their hit romantic comedy, 50 First Dates. In the movie, the actress plays a character whose memory resets after every 24 hours making it a wee bit tough to Adam's character to date her. They embark on a happy, painful, marvellous romantic journey, nevertheless. And now, the actors have reunited for a parodic reboot of their hit film. In the new sketch, for The Drew Barrymore Show, the two actors tell us what the characters' lives would be like in 2020 amid the pandemic. Adam Sandler Birthday: 5 Critically Celebrated Movies You Must Watch to Grasp the Caliber of the Actor.

Just like in the climax of the film, Drew wakes up with no memory and a videotape from Adam fills her in all she needs to know. Only this time, he also has to explain the pandemic to her. And also, Netflix. Friendship Day 2020: From Selena Gomez - Taylor Swift to Drew Barrymore - Cameron Diaz, Here's Looking at Hollywood's Most Stunning BFFs.

Sandler and Barrymore have also starred together in comedies like The Wedding Singer and Blended. 50 First Dates remains Sandler's highest-rated comedy on Rotten Tomatoes. Blended did not get its fair due. It has plenty of moments of chuckles and laughter. The two actors' reunion only makes us wish for another film featuring them.

Drew was last seen in Miss You Already in 2015. She will be next seen in the comedy The Stand-In. She kicked off her daytime talk show, The Drew Barrymore Show, on Monday. For her debut episode, she reunited with her Charlie's Angels costars Cameron Diaz and Lucy Liu.

(The above story first appeared on LatestLY on Sep 15, 2020 10:55 PM IST. For more news and updates on politics, world, sports, entertainment and lifestyle, log on to our website latestly.com).