Ed Sheeran has said there is a lot of 'side-eye' going on at major prize-giving ceremonies and that he can feel the 'resentment and hatred' in the air. The 'Perfect' hitmaker doesn't like seeing artistes not supporting other artistes and wanting their peers to "fail". 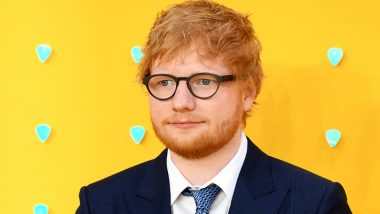 Grammy winning-singer Ed Sheeran has said there is a lot of "side-eye" going on at major prize-giving ceremonies and that he can feel the "resentment and hatred" in the air. Appearing on Audacy's The Julia Show, Sheeran said: "The room is filled with resentment and hatred towards everyone else and it's quite an uncomfortable atmosphere. Ed Sheeran Confirms Teaming Up With BTS Once Again and Netizens Are 'Happier' Than Ever!

"All the artists are sweet people, but they're like, surrounded by entourages that want them to win too, so it's one artist surrounded by ten people and another artist surrounded by 10 people and everyone is kind of giving each other the side-eye." The 'Perfect' hitmaker doesn't like seeing artistes not supporting other artistes and wanting their peers to "fail". Ed Sheeran, Taylor Swift, One Direction and More - 10 Times Your Favourite Pop Stars Made Cameos in Hit TV Series (Watch Videos).

He added: "It's nothing to do with MTV or the award show, it's at all the other awards shows (too); Billboards, GRAMMYs ... AMAs, it's just lots of people wanting other people to fail and I don't like that." The 'Shape Of You' hitmaker said England's awards show such as the BRIT Awards are more light-hearted as everyone is out for a good time, reports femalefirst.co.uk.

He added: "In England, our award shows are just like, everyone gets drunk and no one really cares who wins or loses, it's just sort of a good night out. People get the same feeling as me at those award shows. I've spoke to people and they're like, 'I just felt really depressed afterwards'.

"The atmosphere is just not nice a It's a really, really horrible atmosphere to be in there. I always walk away feeling sad and I don't like it." The singer also isn't a fan of the after-parties. He said: "The after-parties, again a it's not just musicians. It's musicians, all their entourages, then you got influencers and blah blah blah."

(The above story first appeared on LatestLY on Sep 16, 2021 10:31 PM IST. For more news and updates on politics, world, sports, entertainment and lifestyle, log on to our website latestly.com).