Red Notice: Ryan Reynolds Talks About His Role as Nolan Booth and Competing With Himself and His Own Characters in Netflix’s Movie

Red Notice is an action comedy film written and directed by Rawson Marshall Thurber. The film also stars Dwayne Johnson and Gal Gadot. The film is about an Interpol-issued red notice that is a global alert to hunt and capture the world's most wanted but with a dash of humour. 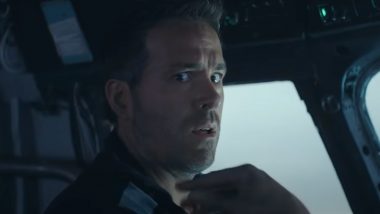 From starring in romantic comedies to portraying a witty superhero, doing high octane action and winning hearts with his spontaneous one-liners, Ryan Reynolds ups his own game with each character he plays on screen. The Hollywood star is all set to sweep the audiences of their feet once again with his performance as a thief named Nolan Booth in the upcoming Netflix film 'Red Notice'. Red Notice Trailer Out! Ryan Reynolds, Dwayne Johnson, Gal Gadot's Thriller To Stream on Netflix From November 12 (Watch Video).

In a conversation with IANS during a select roundtable, Reynolds talked about the pressures of upping his own ante and competing with himself and his own characters. He told IANS: "That's a good question. You know a little bit. The next movie that I have coming out is called 'Adam Project' and it's a blockbuster kind of a movie but it is much more like a personal story. It's far more emotionally grounded than something like this." OTT Releases of the Week: KayKay Menon’s Special Ops 1.5 and Nivin Pauly’s Kanakam Kaamini Kalaham on Disney+ Hotstar, Dwayne Johnson’s Red Notice on Netflix & More.

"There is no intense sarcasm or pop culture references It's very specifice It was inspired a little by 'ET' and some of those movies that I used to love as a kid e In tone not as a subject matter. I don't have pressure as such because I am excited to tell different kinds of stories and hopefully (I) work in films that are surprising." The 45-year-old actor, who was awarded a star on the Hollywood Walk of Fame in 2017, thinks that his last film 'Free Guy' "was surprising for people".

"And I feel the 'Adam Project' will feel like that as well, which is a Netflix film as well," he added. 'Red Notice' is an action comedy film written and directed by Rawson Marshall Thurber. The film also stars Dwayne Johnson and Gal Gadot. The film is about an Interpol-issued red notice that is a global alert to hunt and capture the world's most wanted but with a dash of humour.

What according to him makes action comedies such a popular genre? "I don't know specifically what makes this genre popular among people of all age groupse A lot of people love action-comedy adventures. I personally love treasure hunts, which is part of the DNA of the movie, which is the treasure hunt. Growing up watching a lot of those films e" The actor, who is married to actress Blake Lively, recalled his childhood favourite films. "'National Treasure' and 'Indiana Jones' and 'The Thomas Crown Affair' e I find them exciting and a lot of people do. So, yeah!"

(The above story first appeared on LatestLY on Nov 08, 2021 04:41 PM IST. For more news and updates on politics, world, sports, entertainment and lifestyle, log on to our website latestly.com).