DeBose's win comes amid the actress receiving her first Oscar nomination for best supporting actress, reports hollywoodreporter.com. She has already won a Golden Globe for the role. 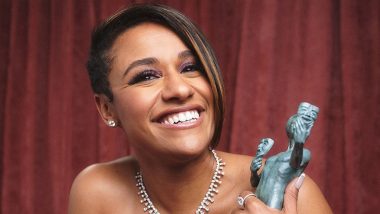 Hollywood actress Ariana DeBose took home the award for outstanding performance by a female actor in a supporting role for "West Side Story" at the 2022 Screen Actors Guild (SAG) Awards on Sunday. She was nominated alongside Caitriona Balfe, Cate Blanchett, Kirsten Dunst and Ruth Negga. The award marked DeBose's first nomination and win. SAG Awards 2022: Michael Keaton Dedicates His Award to Late Nephew With an Emotional Speech, Shares His Thoughts for Ukraine.

In "West Side Story", DeBose portrays Anita, a San Juan Hill seamstress and the older sister to the movie's female lead Maria. The film reimagines the classic story of forbidden love between star-crossed lovers Maria (Zegler) and Tony (Ansel Elgort) and the rivalry between teen gangs, the Jets and Sharks, set in the backdrop of mid-1950s New York. "It's taken a long time for me to feel comfortable calling myself an actor. My roots come from the dance world and the Broadway stage," she said.

Talking about the film, she said: "The Anita that we see on the screen, took every bit of me, but she took 10 years to make and I'm extremely proud of her and of our film. And I really do believe that when you recognise one of us, you recognise all of us in a way." She later thanked director Steven Spielberg for "believing in the possibility of not only my talent but of that of my colleagues" and her cast and crew which represented a "labour of love" and "beautiful cinematic experience". SAG Awards 2022: Squid Game, Ted Lasso Win Big, Will Smith Takes Home Best Actor Trophy; Check Out the Complete List of Winners!

She finished her speech by thanking all those in attendance at the SAG Awards: "I have watched so many of you for a very long time. You inspire me and you continue to do so and I am just thrilled to be among you." DeBose's win comes amid the actress receiving her first Oscar nomination for best supporting actress, reports hollywoodreporter.com. She has already won a Golden Globe for the role.

(The above story first appeared on LatestLY on Feb 28, 2022 12:27 PM IST. For more news and updates on politics, world, sports, entertainment and lifestyle, log on to our website latestly.com).