The recent one with the entire trailer leaking probably might have been the biggest, but no, there is more. A recent behind the scenes photo finally might have given us our first look at Andrew Garfield and Tobey Maguire in Spider-Man: No Way Home. 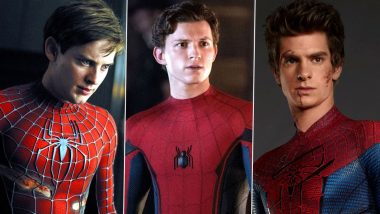 While the first photo is quite blurry, you can easily make the people out to be Tobey Maguire and Andrew Garfield. The second photo gives us a way better look at Andrew Garfield’s Spider-Man who seems to be sporting his costume from The Amazing Spider-Man 2. Only this version of it looks more rundown and darker, sort of looking similar to the costume from The Amazing Spider-Man. While of course these images could be some very good fakes, you got to agree that they look pretty damn convincing. Spider-Man No Way Home Trailer Review: Tom Holland, Benedict Cumberbatch’s Camaraderie Thrills Fans, Doc Ock’s (Re)Entry a Cherry on Top.

It’s not only the images though that we have with us today. This next bit of confirmation comes straight from one of the stars of Spider-Man: No Way Home. JB Smoove who plays teacher Julius Dell in the film was asked the question “Which of the Spider-Man actors was he most excited to see Tom Holland work with in the film?” and this is what he said.

Pic From the Set Says It All:

Now we have a bunch of leaked photos and an actor from the film confirming their appearance. With the previous villains also set to return and us getting Jamie Foxx, Alfred Molina and Willem Dafoe returning, their appearance seems even more likely as the days go by. Here is hoping that Sony doesn’t spoil their return in any of the trailers and save the surprise for the cinemas. Spider-Man: No Way Home starring Tom Holland, Zendaya, Jacob Batalon, Benedict Cumberbatch, Jamie Foxx, Alfred Molina and JK Simmons is scheduled to release on December 17, 2021.

(The above story first appeared on LatestLY on Aug 24, 2021 04:36 PM IST. For more news and updates on politics, world, sports, entertainment and lifestyle, log on to our website latestly.com).