Unhinged is a thriller film directed by Derrick Borte, based on a screenplay by Carl Ellsworth. The movie stars Russell Crowe, Caren Pistorius, Gabriel Bateman, Jimmi Simpson and Austin P McKenzie. Unhinged is streaming on Zee Plex on pay per view basis in India. 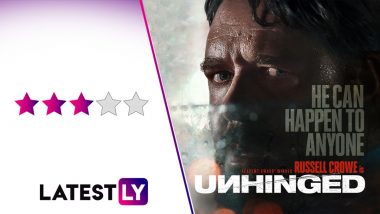 Unhinged Movie Review: Russell Crowe's Tom Cooper in Unhinged is what you get when you cross William Foster from Falling Down with that faceless, mysterious trucker in Steven Spielberg's Duel. An nearly unstoppable force of unbridled rage, Cooper is a psychopath who, in the opening sequence of this thriller, is shown killing his ex-wife and her new husband. His fury doesn't end there. If Falling Down's antagonist took his anger on an entire city, then Cooper, taking a page out of Duel's trucker, focuses on a single target. Russell Crowe’s Unhinged to Release in India via Pay-Per-View Service Zeeplex on This Date.

That target is Rachel (Caren Pistorius), a single mother in New Orleans, whose big mistake was honking angrily at Tom's vehicle at a traffic signal, while dropping her son Kyle (Gabriel Bateman) at school. That little road-rage incident soon turns into a murderous saga, as Tom targets her family and dear ones, while leaving the entire city the collateral damage of his uncontrolled rage. What's even more terrifying is the fact that Cooper could be any of us, living in a world of brimming fury and desperation, as the opening credits has no qualms in showing off.

Watch the Trailer of Unhinged:

Unhinged is pretty decent film, gripping in most parts, that doesn't leave for much space for distractions. It nearly makes up for the fact that none of the characters have any distinct novelties in how they are written, and offers very less scope of character development. Even the plot is pretty predictable, with a somewhat straight ending and some hard-to-forget loopholes. Like, how does Tom manage to access Rachel's banking apps from her stolen phone without her password. There is also the matter of the film showing mental illness in a negative light.

If you keep your expectations low and moral values aside, then you will find Unhinged to be a relentless, occasionally brutal, thriller that keeps you on the edge of your seats. That too, at merely one and a half hour runtime, including credits! This is simple B-fun thrills! Russell Crowe's New Avatar Stuns Internet; Actor is Almost Unrecognizable (View Pics).

Most of the credit for what makes Unhinged watchable is Russell Crowe's terrifying performance as the man, who lets the lid loose of his bottled anger and frustration. Having gained pounds to nail the right look, he makes for a very imposing figure, a man you shouldn't mess with even when he looks calm. As his targeted victim, Caren Pistorius does a good job of depicting the tensions and fears of a woman who isn't sure how a sunny day turned into the most frightful one of her life.

- Predictable in How It Ends

- No Scope for Any Character Development

Unhinged is a thrilling ride that substitute subtleties for brutalities, with Russell Crowe tearing down the scenery with a devilish performance. Gripping as it lasts! Unhinged is streaming on Zee Plex on pay per view basis in India.

(The above story first appeared on LatestLY on Nov 13, 2020 07:03 PM IST. For more news and updates on politics, world, sports, entertainment and lifestyle, log on to our website latestly.com).