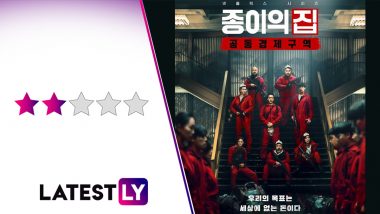 In an ideal world in Korea, North and South counterparts have come to a truce and prepare for a unification. The start is a joint economic area where people from both sides can come and prosper. Professor (Yoo Ji-tae) assembles a team of outcasts that includes Lee Kim Ji-hoon (Denver), Jeon Jong-seo (Tokyo), Jang Yoon-ju (Nairobi), Lee Hyun-woo (Rio), Won-jong (Moscow), Kim Ji-hun (Helsinki) and Lee Kyu-ho (Oslo) and Park Hae-soo (Berlin). His motive is to not just steal money from Mint, which is in the Joint Economic Area, but also print new notes to last a lifetime. But once inside, the situation goes out of control. Whether or not Professor and his students succeed forms the rest of the story.

Getting to the good parts, it's difficult to pick a side here. Even with the cops, you aren't sure if they are to be trusted. That does keep you on the edge for a while. The twists are another winner here. The moment you feel it's endgame for them, Professor spins something and thing fall back in place. The series also explores the motive for every heist member in being part of this. That gives a lot of rationale to why they what they do. For those who have watched the Spanish original, it could be a stale piece but I have a feeling the intrigue remains. The makers here do try to add a bit of Korean sensibilities especially the hostility between the divided nations.

But the series does test your patience. The execution is so sluggish it's a long wait for a plot twist to make the proceedings interesting. Only the non-familiarity with the language and the need to follow the subtitles make you watch the screen at times. What's also a bit annoying is the way the heist is planned by Professor. Apparently, he planned it for years and yet he completely missed an entry point. He has this rule of not killing anyone from hostages to gang members to even cops. So after looting the money for the first time, when they pretend to escape, they take out their guns but shoot in the air without targeting the cops. But he strangely didn't factor in that the cops will fire at them anyway. Isn't that common sense?

Also, wouldn't it have been great if the characters were named after Korean cities? The whole justification for the characters picking towns all over the world as their names is quite loose.

Also, the preparedness for the heist has been very half-heartedly written. It hardly shows any location recce or weapons training apart from a short scene of Rio and Tokyo's shooting practice. It just keeps trying to establish why Berlin tries to hijack the entire mission couple of times. I might get hate for mentoning this but Aankhen starring Amitabh Bachchan, Akshay Kumar, Arjun Rampal and Paresh Rawal had more training sequences which is important for a heist drama. In fact, crisis negotiator Seon Woo-jin, played by Kim Yun-jin hardly spends her time negotiating. She operates more like a detective than a negotiator. Such unexplained scenes are plenty in the series. Yoo Ji-tae To Play Professor in Money Heist Korean - Joint Economic Area; Here's Why The Actor Is Apt For The Role.

If I talk about performances, there are no complaints. Park Hae-soo obviously does a stellar job with his megalomaniac Berlin act, while Lee Kim Ji-hoon as Denver pleases you the most when he falls in love. The women are the best here everyone from Jang Yoon-ju to Jeon Jong-seo to the girl who gets shot first. But it's Yoo Ji-tae as Professor that stays with you even after the series. Not because he looks like that at the age of 46, but because of the way he does the character. For Ji-tae, playing a mastermind is nothing new. He did that in The Swindlers and Mad Dog as well. So it's a familiar territory for him and he does full justice to it.

(The above story first appeared on LatestLY on Jun 24, 2022 09:49 PM IST. For more news and updates on politics, world, sports, entertainment and lifestyle, log on to our website latestly.com).