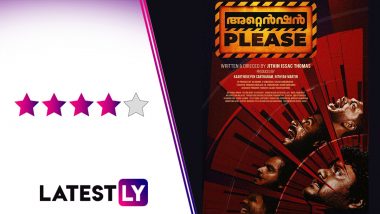 Attention Please Movie Review: A good storyteller doesn't need visuals or special effects to tell a compelling story. Sometimes it is the way you present your plot, purely verbally at that, that could win over your audience. Vishnu Govindan's Hari in the new Malayalam Netflix film, Attention Please, is one such storyteller, and the way how that character manages to tell such rapturing stories is also the success of the another storyteller here, director Jithin Issac Thomas, who has come up with an incredible film within its minimal setting, and thereby bettering his underwhelming debut effort in Freedom Fight (the final segment in the anthology). Attention Please: Karthik Subbaraj Forays into Malayalam Cinema with Jithin Isaac Thomas Directorial.

Attention Please, which had its premiere at IFFK 2022, gained spotlight for being Tamil director Karthik Subbaraj's Malayalam debut production. It is easy to understand why Karthik would be attracted to Attention Please, especially if you are aware of the filmmaker's best three directorial ventures - Pizza, Jigarthanda and Iraivi - all revolved around storytellers, be it as an aspiring screenplaywright in Pizza or a struggling filmmaker in Jigarthanda or an alcoholic film director in Iraivi.

Returning to Attention Please, Hari is a struggling writer, who thinks of himself as an original talent who just can't catch a break. His roommates, however, don't share the same opinion, even though most of them haven't bothered to listen to his stories. Among them, Jithin (Sreejith) is his oldest friend and he is the most sceptical of the lot, having borne Hari's rent and food expenses for two years. He keeps taunting Hari by saying his scripts lack content, which is why he hasn't caught any break. What's more, Hari also has to bear the behind-the-back sneers and jibes at his writing career.

As the roommates prepare themselves for a night for binge-drinking, one of them asks Hari to tell one of his stories. Hari tells a disturbing tale of moral policing that leaves others perturbed enough to comment he ruined their mood. Ironically, just a few moments ago, one of them was recommending A Serbian Movie - easily one of the most disturbing movies ever made filled with scenes of sexual depravity, newborn rape and necrophilia.

It is easy to allegorise who Hari stands for, and also his friends. There has been recent debates that we have been too critical to our cinema, while we are softer on  foreign cinema. In the rise of internet critics, there is this consensus that wokenism is stifling story-telling, and also the tendency to dissect each aspect and see if there is any sort of plagiarism. Even yours truly has been accused of the same. 'Nitpicking' that's the term to be used.

Hari is an excellent storyteller, and it is clearly seen in how he manages to enrapture his audience who, at least, waits till the end to give him their mostly negative feedback. Like when Hari narrates his second story, the camera goes for a still frame that focuses on him around his listeners for around half the story, allowing him to build it up. It is only when he drops in the first major twist in his story, is when the stillness of the frame is broken by the surprise reaction of his listeners, and then the camera keeps shifting between the speaker and the listener.

Even when the listeners find something to 'nitpick' in between - like a story that Hari narrates of a father and a daughter reminds one of a thread in Mohanlal's Pavithram - we hear them speak in hushed tones, and wait only till the end to tease and deprecate him of how 'unoriginal' and 'ineffectual' his stories are. Freedom Fight Movie Review: Jeo Baby’s Anthology Film Is a Mix of Eye-Opening Chronicles, Heartbreaking Drama and Shock Value (LatestLY Exclusive).

As the night proceeds, Hari's frustrations in being put down grow deeper and and his stories get even dark and more disturbing. And reflecting the tone of his stories, even the night gets darker thanks to an unexpected event. In respect to the film, here's where I stop divulging more details of the plot, lest Hari turns his attention to me.

All I can say is that Attention Please, unlike its strangely whimsical name (though it does stand for Hari's anguished cry for attention for people for his writing), takes some very perturbing turns, with minimal need to go graphic  visually. Never had I felt so squeamish when Hari speaks of 'erection' in his first story, going by the context of it, or how a verbally told horror story can turn out to be even horrifying than something like Saw, if narrated in the right tone. There are discussions of morality, of caste discriminations - a joke about the name of a pappadam brand in the beginning gets a more serious implication later on - as well as how caste still has a big role to play in Malayalam cinema, and on feminism, especially with the arrival of a girlfriend of one of the roommates in the mix. And of course, laments on how scriptwriters never gets any due in cinema, while stars walk away with both brickbats and bouquets.

Things get a bit talky at times, but the director neatly ties the discussions up with the thriller aspect of the movie, while slyly bringing out the double standards of the friends (like how one of them enjoys shooting 'millions' on PUBG, but gets queasy hearing violence in a story) .

Of course, the credit for you to get completely engrossed with the proceedings also goes to how the movie has depicted this bunch of roommates and their conversations to be so relatable. If you, in your life, have ever hung around a group of cinema-obsessed friends and end up living with them even briefly for some time, the conversations feel so very relatable, from the funny jibes to the elitist views (Hari making an opinion on a movie he hasn't bothered to see, despite complaining to friends they judge him without reading his stories) to the flawed ones (like the 'homophobic' incident a friend shares).

Even better are the actors cast in the roles. All of them - be it Sreejith, Anand Manmadhan, Jobin Paul, Jicky Paul and the latecomer Athira Kallingal - are very natural in their respective roles. However, the show belongs to the talented Vishnu Govindan, who is fantastic as the disturbed, creepy and duplicitous storyteller. The fact that the majority of the runtime relies on his narrated 'stories' and how convincingly he pulls them off by getting you completely invested in them is his biggest asset here as a performer.

Any niggle? Forgive me, Mr Hari for nitpicking, but I found the conclusion to be underwhelming - the trope used here is something that has been done and dusted in the past. Wait, I know your defence here, as you have explained in the movie - every story borrows elements from other stories, so nothing feels original in that sense. Still...

PS: Quite the paradox that the the most sceptical of the roommates about Hari's stories shares his name with the movie's director.

Attention Please is a gripping piece of cinema that leaves you enthralled and queasy, the latter without even the need to go for visual cues. Despite a cast of non-regular faces and its minimalist setting, the movie stuns you with its engrossing storytelling from Jithin Issac Thomas, well-placed twist(s) and a brilliant performance from Vishnu Govindan. Attention Please is streaming on Netflix.

(The above story first appeared on LatestLY on Sep 19, 2022 06:16 PM IST. For more news and updates on politics, world, sports, entertainment and lifestyle, log on to our website latestly.com).